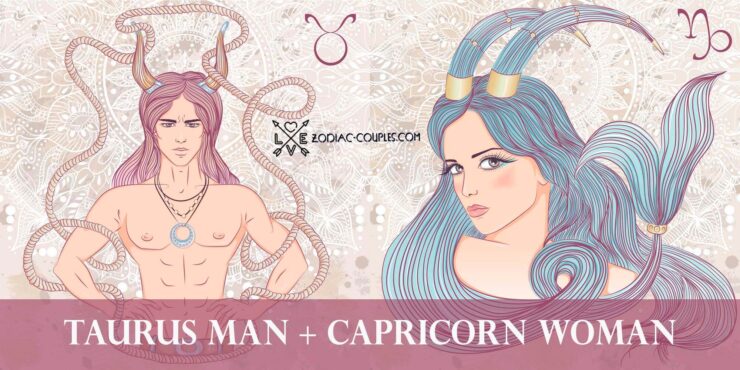 A Taurus man and a Capricorn woman can fall in love from the first meeting. These zodiac signs have a well-developed intuition and quickly realize that they are exactly the person they were looking for next to them. They belong to the same element, and their temperaments and desire for stability are similar. However, they are attracted to each other by precisely those qualities that they lack in themselves. A man knows how to preserve and increase all his resources, both material and non-material, and a woman knows how to distribute them rationally.

Zodiac signs build relationships based on trust and respect. They enjoy spending time with each other, and partners understand each other perfectly. Their connection is at an exceptional level, but even they have problems. The Taurus man and the Capricorn woman are very burdensome and difficult to trust people. They will often be jealous and suspicious. Partners know how to find a compromise and solve problems, but only if both need it.

Jessica is Capricorn, and Allen is Taurus. The couple first met at the Entertainment Weekly SAG Awards party in 2016 and immediately attracted each other. They danced all evening, and this is how their story began. In 2019, the couple got married, and in the same year, the union announced that they were expecting their first child. Their meeting became fateful, as they immediately realized that they had met their partner with whom they wanted to spend the rest of their lives. We wish the young family only happy moments and many more to come.

Diane is Capricorn, and Al is Taurus. They met while filming The Godfather in 1972. Diane fell in love with him at first sight. She admired his charisma, sociability, and sense of humor, and she inspired and supported him. However, the couple’s relationship started only after the release of the second part of the film. Their relationship was developing, and Diane wanted the next step. When she said that she wanted to get married and gave Al an ultimatum, the couple broke up after the third part of the film was released. The partners managed to remain friends, and they continue to support each other.

Rami is Taurus, and Lucy is Capricorn. The partners met in 2017 on the set of the film Bohemian Rhapsody, and soon their romantic relationship turned into real life. Already in 2018, the couple made their red carpet debut together. Even though they attended all the events together and were together during the Bohemian Rhapsody press tour, the union never confirmed their relationship. But already in 2019, during his speech at the Palm Springs International Film Festival, Malek thanks her and calls her love. The two began to actively attend events, show love in public, and even gave one interview about relationships. It looks like the couple is doing well, and we are happy for them.

Other Taurus and Capricorn famous couples