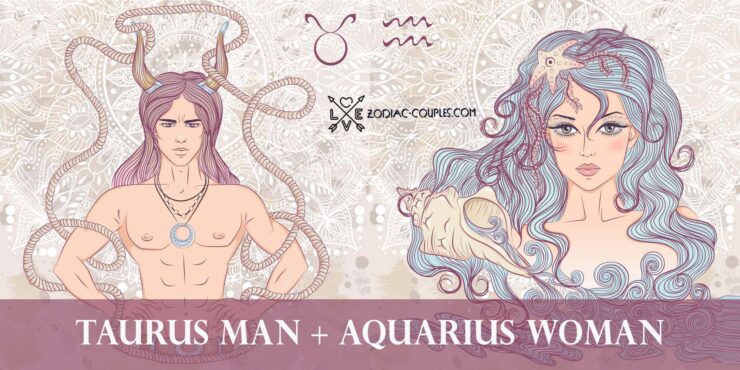 The relationship between a Taurus man and an Aquarius woman will be reliable but not stable. Instability will manifest itself in constant change and activity, which will definitely please both zodiac signs. There are mutual respect and understanding between partners. Aquarius is very light and cheerful, which will bring brightness and emotions into the life of Taurus man. A woman intrigues and attracts a man with her fickleness.

At first glance, partners cannot be compatible because they are completely different, but their differences attract. They are a closed book for each other, which one wants to read and understand. They constantly discover new facets of each other and find more and more in common. In the course of a relationship, they begin to make plans and set goals to achieve, and that is what unites them. Taurus man will not waste time on unpromising relationships, so he wants to build a family with a woman if he chose her.

The Aquarius lady is very stubborn by nature and does not accept refusals, so a man will have to learn diplomatically to let her know if he does not agree with something.

George is Taurus, and Amal is Aquarius. A mutual friend introduced the partners in 2013, and at first, they did not think about the relationship but corresponded by e-mail. Two months later, the couple went on their first date, which went well. In April 2014, George proposed to her, and in September of the same year, they got married. Until 2017, the union actively attended social events, and in February, they announced that they were expecting the twins. The age difference did not prevent them from building a happy family. They keep going on dates, and their fires never fade.

Max is Taurus, and Elizabeth is Aquarius. They met as students at a party in 1993. Soon after this meeting, they began a relationship, but they were very responsible for building their lives and were in no hurry to get married. Max made an unexpected proposal ten years later, and they got married in 2003. The couple has two sons born via surrogate.

For the partners, it was undoubtedly the main thing to be able to find a common understanding and balance in personal and professional life, and they succeeded. With such a rational approach, they built a family consciously, and now everything is fine with them.

Adolf was Taurus, and Eva was Aquarius. They met in 1930 when Eva was working as a salesman in Hitler’s photographer’s shop. Brown became Adolf’s mistress, whom no one knew about until the very end of the war. She made several attempts to commit suicide to attract his attention since he was busy with politics and did not find a place for her in his life. They never appeared together in public, as he believed that relationships and marriage would negatively affect his reputation and politics. She periodically spent the night at his house when he was in the city. Her devotion (or dependence) knew no bounds. In 1945, she joined Hitler in Berlin, and he married her in recognition in a bunker. The day after the wedding, both partners committed suicide, and their bodies were lying side by side.

Other Taurus and Aquarius famous couples