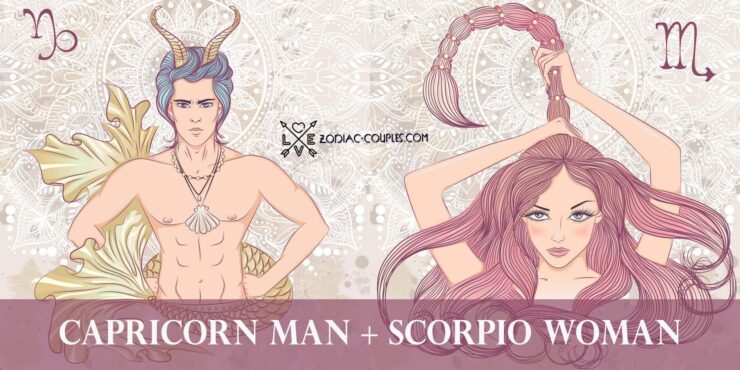 The Capricorn man and the Scorpio woman have every chance to build a sincere relationship. Still, they have a lot of work to do. The union of these zodiac signs consists of two strong personalities with whom it is difficult to establish communication. Everyone will fight for a place of the leader and not want to give up their positions. There may be many quarrels in a couple, which are almost impossible to avoid, so neither Capricorn nor Scorpio wants to compromise. A distinctive feature of this relationship is that for the zodiac signs, the priority is not physical connection and desire but attraction exclusively on the intellectual and spiritual level.

Success in relationships awaits those couples who have managed to find complementary qualities and character traits in a partner, come to an agreement, set priorities and common goals. Although they quarrel often, it doesn’t sound like an Italian family. Each conflict is the formation of boundaries in a pair and establishing the measure of what is permitted. These are two emotionally mature individuals who consciously approach disagreements. They love comfort, deeply respect their partner as an equal companion, and are very loyal to him.

Orlando is Capricorn, and Katy is Scorpio. They met in early 2016 at a post-Golden Globe party. It became immediately apparent to the people around that a strong chemistry had formed between the two. They talked and flirted all evening and left the party together. After four months, Perry confirmed her relationship by posting a photo on Instagram. They traveled together, arranged surprises for each other, and spent holidays with their families. But in 2017, they broke up peacefully. In 2018, they began to appear together in public again, and Katy stated that she was no longer alone. A year later, she announced their engagement. Their wedding was postponed continuously, but in 2020 they welcomed the baby girl. Their marriage is postponed indefinitely, but this does not prevent them from being happy. It seems that the pause in the relationship had a positive effect on their union.

Kevin is Capricorn, and Cindy is Scorpio. The couple met while they were still students and graduated from the same college. They shared the dream of an acting career. After graduation, the partners decided to move on to the next stage and got married in 1978. In marriage, they had three children. Kevin’s career development had a negative impact on their marriage. Aside from the rumors of his cheating that popped up, his wife couldn’t adapt to his busy schedule by raising children herself. In 1994, they announced an amicable divorce and resolved all issues related to children and finances peacefully.

Mark is Capricorn, and Claire is Scorpio. They met in 1987 during a production of The Wandering Jew while she was still married. Following her divorce, the couple married in 1989, and Mark adopted Claire’s two daughters from a previous marriage. They did not have time to stay at home with their children, and the two took them to work in the theater. In 2012, the family suffered a terrible loss – the death of their 28-year-old daughter. It took all of them a long time to cope with their grief.

Commenting on their marriage, Claire says that a relationship is always a job, but she was never bored with Mark, and this is the main thing.

Jenny is Scorpio, and John is Capricorn. The couple began dating in late 1998. After a couple of months, Jenny and John got engaged and married in September 1999. The result of love was a son born in 2002. Unfortunately, their marriage had to endure a great ordeal. In 2005, their son Evan was diagnosed with autism, which left the parents in shock. The couple divorced four months after the diagnosis. It is not known what caused their divorce, the misfortune with their son that fell on their heads, or it was the result of disagreements, but after the divorce, Jenny very soon entered into a new relationship. ⬇

Jenny is Scorpio, and Jim is Capricorn. The duo met in 2005, shortly after Jenny’s divorce from her husband and her child’s father. ⬆ The couple kept their relationship under wraps until 2006. They lived together, but there was no question of a wedding since both believed that they did not need confirmation of their feelings with a piece of paper. Jenny had an excellent relationship with Jim’s daughter from a previous relationship. The couple was never bored, and their union was built on humor and romance.

However, in 2010, they announced their breakup on social media. It was clear that the partners were parting amicably. The reason for their separation could be the depression that Carrey suffered and difficulties with raising a child with autism. They were initially different personalities, and later the audience began to notice how the spark between the two was extinguished.

Ashley is Scorpio, and Justin is Capricorn. They met in 2009 at a New York church, where she volunteered and coordinated guests. They met at the elevator and immediately felt a connection with each other. According to their religious views, the couple practiced sexual abstinence, from which their dates were only brighter and more prosperous. They mostly spent each date at karaoke, cycling, or walking. As their relationship began to develop, Graham took him to meet her family, but the elderly family members’ reaction was unexpectedly adverse and racist. Their opinion did not affect her decision to link her life with this man. They got engaged in 2010 and got married two months later. In 2020, they had a son, which they shared with the public. Partners enjoy every minute they spend together and now a new family member.