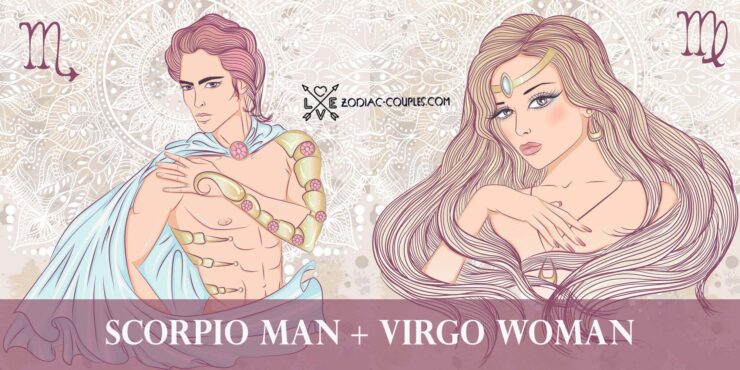 The union of a Scorpio man and a Virgo woman breaks all compatibility records. They find everything they need in each other. Thanks to him, their relationship is deep, and thanks to her, they are stable. At the beginning of a relationship, a woman looks closely at a man, and he is fascinated by her closeness. While he was making Napoleonic plans to capture her heart, she had already thought out her steps long ago, how to make him fall in love with her even more. They are constantly trying to outsmart each other because their relationship is like a chess game, which fascinates them.

The Virgo woman has incredible feminine energy. Such qualities characterize her as tenderness, care, kindness, the ability to love. The Scorpio man, on the other hand, is very assertive, stubborn, goal-oriented, determined, and passionate. He does not tolerate lies and hypocrisy, and Virgos do not deceive a partner.

The Scorpio man is a real leader and he wants both moral support and understanding, he is interested in a woman companion in his stormy adventures. If Virgo is not good for this role, he starts to “correct” her. He manipulates, tyrannizes, unbalances her. He wants her to give an emotional response, and not hide behind eternal reasoning. But Virgo is self-sufficient. As soon as she begins to see a threat in Scorpio, she will leave. She is unlikely to be held back, Virgo is not afraid of loneliness.

Mark is Scorpio, and Sunrise is Virgo. The couple met literally on the street in 1998 when Mark was struggling with his career, and two years later got married in 2000.

Sunrise sacrificed her career as an actress for her family and raising her children, as she did not want to miss a single moment of their growing-up. Not everything was smooth and easy in their marriage; in 2001, Ruffalo was diagnosed with cancer. His wife never left him in difficult moments, was always there, even in moments not related to the disease.

The couple looks very happy, and they are like each other’s best fans, Mark says that he probably wouldn’t have made it without his wife.

Kimberly is Virgo, and Brad is Scorpio. Brad first saw Kimberly while watching Father of the Bride in 1991, where she starred. He was more interested in the actress than in the girl next to him. Nearly a decade later, Brad cast Kimberly for his I’m Gonna Miss Her music video, and in 2003 the two got married. They have two children, and they seem to be doing great. The secret of their marriage is the same sense of humor. They are always comfortable and safe together.

Zoe is Virgo, and David is Scorpio. The two met and started dating in 2007 when she was a waitress, and he directed the Run, Fat Boy, Run film. The couple tied the knot after three months of engagement in 2010. Their daughter was born next year. In 2017 Zoe and David announced that they are separating but stay in the best possible relationship. They cooperate as parents and spend time together.

Barbara Patrick (Virgo) and Robert Patrick (Scorpio) ❤️ – the couple got married in 1990. They have two children together: son Samuel and daughter Austin. They have worked together and appeared in such projects as Zero Tolerance and The X-Files. Their life is highly private, but it is known that the two continue their long marriage and don’t think of break up.