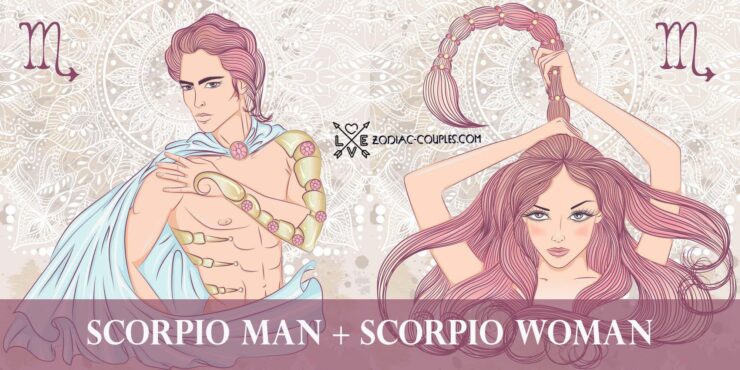 The union of a Scorpio man and a Scorpio woman has good compatibility, provided that they manage to work out their problems. By nature, the zodiac sign is very domineering, stubborn, uncompromising, and constantly uses manipulation in communication. Partners will attract each other from the first meeting. Their relationship will be very passionate and emotional. They do not know how to keep everything to themselves, so they often sort things out and try to achieve what they want by pressure on others. However, this only sounds scary, but partners have every chance of a happy life in practice.

Zodiac signs in relationships give each other that storm of emotions that they would not receive from other signs. They have common views on life and interests, a similar rhythm. They need to learn how to communicate and negotiate, and then both partners will be in the black. Since Scorpio is a very passionate zodiac sign, physical intimacy and the quality of their sex life are also very important to them. They will be not only good lovers but also friends. A distinctive feature of Scorpio is loyalty and sincere love.

Kris is Scorpio, and Bruce (now Caitlyn) is Scorpio. The couple met in 1990 on a blind date. Bruce liked her immediately, and they began to develop a relationship rapidly. Five months later, the couple was already looking for a home to reunite their families of children, and Bruce proposed to her in a restaurant without a ring. He said that he knew that Kris had a very sophisticated taste, and therefore she got the best ring for her 20th wedding anniversary. They married in 1991, and the couple had two more daughters.

Their marriage seemed strong and indestructible, but in 2013 they announced their separation. As it turned out later, Bruce became transgender and changed his identity to Caitlyn. The whole family already supported Caitlyn at that time, and she remained on good terms with her ex-wife. However, it was not without scandals. When Caitlyn made an impartial statement about her wife to the press, the whole family stood up for their mother, and it took them time to resolve all the problems.

Harry is Scorpio, and Nicollette is Scorpio too. They met in 1990 on the set of the film Deceptions. In September 1991, the couple got married, and their marriage lasted eleven months; they later divorced. Even though their marriage ended thirty years ago and lasted less than a year between partners, there are still serious battles on Twitter and threats to “tell the truth, as it really was.” Harry accused Nicollette of cheating on him, but she denied his words. Perhaps it was a good publicity move for both because they were in all the news. It is unknown why their marriage was so short, and the divorce reasons, but the partners were silent all these years.

Nick is Scorpio, and Vanessa is also Scorpio. The couple had known each other since the early 2000s when both were on MTV. In 2006, Vanessa starred in Nick’s music video for “What’s Left of Me,” which he wrote after his divorce from his wife. Meanwhile, Vanessa also ended her relationship, and behind the scenes of the video, a relationship began to develop between them. In June 2009, the couple took a break, and after resolving all their problems, they reunited in October. So in 2010, he proposed to her, and the couple got married a year later. They now have three children, and their union is stronger than ever. The secret of their strong marriage is communication. The couple always talks about problems and their needs and finds solutions together.

Leslie is Scorpio, and Sam is Scorpio too. They met in 2007 at the Chateau Marmont where Sam was filming the movie, and Leslie was waiting to have dinner with friends. He smiled at her, and that’s how chemistry arose between the two. A week later, the couple went on their first date, and they have been inseparable ever since. The partners have collaborated on many iconic films, and they seem to really enjoy working together. They always attend social events together and love to be interviewed. So the couple noted that the secret of their happy relationship is communication, good sex, and a healthy sense of humor. These two have a great sense of humor because it is difficult to find a photo where they are not laughing. The couple is not married and has no children yet.