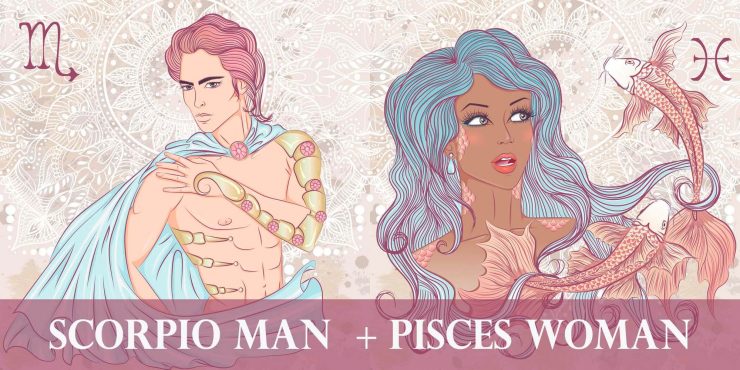 Scorpio and Pisces compatibility is very high. Deep understanding gives a strong and long-lasting love relationship, often turning into marriage between Scorpio man and Pisces woman. The essence of these aquatic natures is to give away. No inner ego prevents them from caring for a partner, striving to understand him and accept him with all the shortcomings. A strong psychological connection helps both to understand each other without wasting words – they are open both in heart and soul.

The combination of very similar qualities and characteristics gives an absolute understanding and an almost identical attitude. Their life principles, attitude to circumstances and people, trust and desire for endless care for each other allows us to speak of this couple as a true example of strength and constancy.

Ryan Gosling is Scorpio and Eva Mendes is Pisces. They have been together since 2012 and have two daughters. Although they are very private about their marriage, Ryan and Eva have proven that their relationship remains strong by rarely talking about their love for each other and their family. And they look really happy together!

Jennifer is Pisces and Brian is Scorpio. They worked together in 2011, but their feelings sparked in 2012 when they met again on another set and started dating soon after. In 2013 they tied a knot and today they are still together and have two kids. From a look on it, their marriage is strong and based on mutual support and love.

Tara is Pisces and Chris is Scorpio. They have met in 2002 when she worked in his bar. In 2008 they welcomed their first son and next year they got engaged. In 2012 Chris and Tara got married. In 2020 she gave birth to their second son.

Both says that on the early stage of relationship they’d frequently break-up and make-up, but eventually the old boring love won.

Jimmy is Scorpio, and Molly is Pisces. The couple met when she came to his show to work as an assistant writer. During the first year of work, they did not communicate, but later they became friends, and in 2009 the two started dating. Three years later, Jimmy proposed to Molly, and the couple got married in 2013. The union welcomed two children in their marriage, and one of them had a heart defect. After that, the couple also became advocates for children’s healthcare.