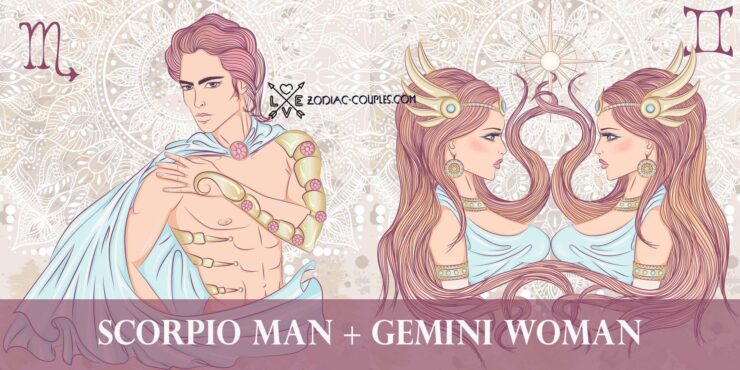 The relationship between a Scorpio man and a Gemini woman cannot be called calm and stable. Of course, they will have a lot of love, joy, and happy moments, but disagreements, quarrels, and showdowns will regularly accompany all this. Both signs are susceptible, so each spoken word’s meaning may be perceived with the wrong context.

The man is very organized. The woman sees support and protection in him. By nature, a Gemini woman is very active, cheerful, and sociable, which sets Scorpio in a positive mood. The man is very stubborn, intractable, and vindictive, so you have to find the right moment in his mood for a conversation. A woman is very fickle and hot-tempered. She tends not to keep her word, and Scorpio doesn’t like that.

First of all, partners value honesty and fairness very much; therefore, it is important to be as open as possible in this union. The truth can be unpleasant, but it is better than the lie that the signs do not forgive. They tend to subtly feel people’s moods and needs, their experiences and are always ready to help. Wisdom, honesty, and negotiation will help these signs build long and happy relationships and marriages.

Nicole is Gemini, and Keith is Scorpio. The two met in 2005 at G’Day USA gala and tied the knot in 2006. Their marriage started with a huge challenge of Keith’s rehabilitation since he had drug and alcohol abuse. They have two daughters, and one of them was born due to a surrogate. As Kidman says, the secret of their long marriage and connection is in kisses. They always give a “hello” and “goodbye” kiss to each other.

Leonardo is Scorpio, and Camila is Gemini. The press was suspicious of their relationship in 2017 when DiCaprio was noticed leaving her house. In 2018, they spent two luxurious vacations together but continued to remain silent about their connection. Throughout 2019, the couple was spotted together at various events, traveling, and celebrated the New Year together. They continue to keep their relationship secret, but the couple is serious according to their close circle. In 2020, these two were caught on a date. Happiness loves silence, and we hope it is, and everything is really great with them.

Judy was Gemini, and Sidney was Scorpio. The couple met in the 1930s when she was still very young. Their reunion happened many years later when both partners had already gone through two divorces. They began dating, and Luft became her manager. Their romance from the very beginning experienced a shock when she became pregnant, and under pressure, she had to have an abortion for her career. However, they still got married in 1952 and had two children.

From the other side, it seemed that the marriage was perfect, and Luft was a wonderful husband, but Judy suffered from depression and alcohol and drug addiction. During their divorce in 1965, she told the judge that her husband beat her and drank a lot. This was her longest marriage. In turn, Luft wrote the book “Judy and I” about their marriage from his point of view, it was published after his death.

Burgess was Scorpio, and Paulette was Gemini. This couple’s marriage was not long. They got married in 1944 and together founded Camden Productions Inc. However, already in 1949, they had a Mexican divorce, which was the fastest and most affordable way at the time. The reasons for the divorce were not disclosed.