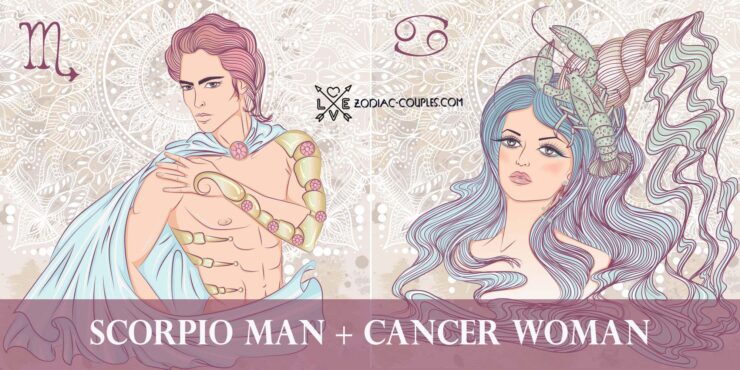 The Scorpio man and the Cancer woman understand that they are drawn to each other from the moment they meet. Signs have highly developed intuition, so they quickly identify their person. They manage to easily establish communication and views on all life aspects since their characters are very similar. The signs of water find understanding in their kind. Their relationship is usually calm, gentle, and comfortable. They show love for each other and protect their happiness. Therefore they keep their relationship secret and do not try to declare their devotion to the whole world. A Scorpio man is an inspiration for a Cancer woman and her support in difficult life moments, always ready to solve her problems. Partners are set for a serious relationship and stability, so they prefer not to waste time if they do not feel the same from their couple.

A couple’s problems begin to appear when the zodiac signs cannot accept the opposite side of their chosen one. The Cancer woman is very impulsive and emotional; she often changes her decisions. A Scorpio man does not understand and hates such behavior since he is often silent and keeps everything to himself, which turns into prolonged depression and bad habits. Zodiac signs show their feelings for a partner by sincerely trying to accept even their bad sides and not pointing out flaws or wrong decisions.

Charles is Scorpio, and Diana was Cancer. They met in 1977, and at that time, Charles was dating Diana’s older sister. In 1978, her sister gave an unflattering interview about him, after which they broke up, but communication with the family did not stop. After several meetings, Charles and Diana’s relationship came to light in 1980, when she was spotted on the royal estate, then their turbulent story began.

In 1981, he proposed to her and flew to Australia and New Zealand for five weeks, leaving Diana alone. They got married five months later, but Diana had doubts even then, since she found a bracelet intended for Charle’s dear friend – Camilla Parker Bowles, and it was too late to cancel the wedding.

The couple had two children and started having relationship problems. The partners began to seek understanding from other people. Diana began to miss official receptions and fell into apathy. Their divorce was announced in 1992 and completed in 1996. Diana died a year later in a car accident.

So here is the story of another Cancer woman in Prince Charle’s life.

Charles and Camilla (Cancer) have met in 1970 at a polo match. They immediately attracted each other, and they had common interests and a similar sense of humor. They began to meet, but Charles left to serve the Royal Navy for eight months. On his return, Camilla was betrothed to another man. When she married in 1973 and had two children, she and Charles were still friends.

He married Diana in 1981, and in 1986 he and Camilla began an affair. After Diana and Charles’s divorce, private conversations with his mistress got into the press, which could not but affect his royal future. In 1995, Camilla divorced her husband. Charles threw a birthday party for her, and soon there was news of Diana’s death.

After the funeral, he put his relationships on hold to make it public. For a long time, the couple could not get official approval for the relationship from the queen but regularly traveled and spent time together. They got engaged in 2005 and got married three months later. However, the palace did not forgive Camilla for causing the collapse of Charles’ first marriage, and when Charles becomes king, she will not receive the title of queen.

Leonardo is Scorpio, and Gisele is Cancer. They began dating in 2000, which greatly attracted the press’s attention, but Gisele stubbornly denied everything. In 2002, it became known that the couple broke up, to which she said that she did not have time for a relationship. This did not last long, since the next year they were together again, and it seemed it was going to the wedding. Although rumors of marriage grew louder, they broke up again in 2005, and this time for good. As Gisele commented on the situation many years later, he did not support her in her self-development. She stopped drinking and smoking, but since he did not follow her example, she no longer wanted it.

Joanne is Cancer, and Adam is Scorpio. The couple met at Juilliard School, where Adam decided to enter after the Marine Corps. They started dating and graduated together in 2009. Together, they decided to combine Adam’s abilities and create Art in the Armed Forces. The two got married in 2013. They hid their personal lives so much that no one knew that in 2016 they welcomed the child. Adam avoided this topic for a long time in interviews. Now the family lives happily together, and they have a dog that they love as much as a full family member. They managed to work together in the filming process, which both enjoyed.

Phoebe is Cancer, and Kevin is Scorpio. The two met in 1983 at an audition for The Big Chill, where she didn’t get the part. Their next meeting took place at the New York Public Theater in 1985, and they started dating. The partners were not embarrassed by the 16 years of an age difference, and in 1989 they shocked the audience with their wedding. When they had two children, Phoebe took a break in her career to take up parenting. The couple immediately earned a reputation for being very secretive, as they never divulged their personal lives, but their red carpet appearances were always spectacular.

Jessica is Cancer, and Nick is Scorpio. They met in 1998 when their common manager introduced them. It was love at first sight for Nick, he fell in love with her voice, and when he heard her singing, he had goosebumps. Nick was only 22 years old, so Simpson’s father was against their relationship. Jessica went against her father. They got married in 2002. The couple began their life together by showing personal life in a talk show that lasted three years. They announced their divorce in 2005, which was finalized in 2006. The couple had no children. As Nick later commented on the situation, he already wanted a family, but Jessica’s father was against their relationship and was involved in their love life.