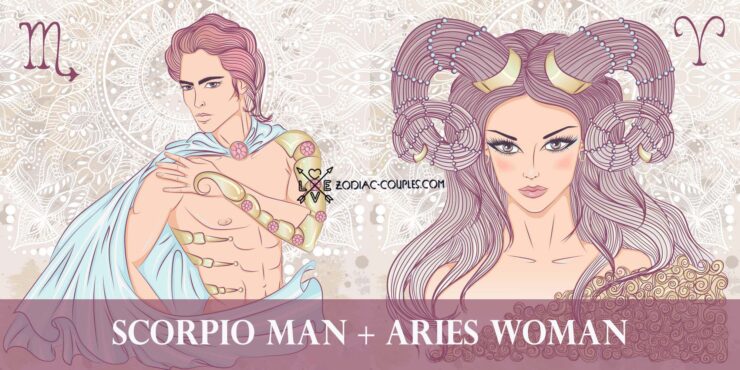 Scorpio Man and Aries Woman are two passionate and emotional personalities. They are authoritarian and stubborn. However, they do not fight for leadership in relationships; they want complete power over the people around them. There will be passionate and vibrant relationships between partners. From the first meeting, a spark is ignited between the zodiac signs, which does not subside. They will not hesitate for a long time but will begin to build their relationship. That is not to say that everything will be stable in their union. Still, they do not need stability either. Aries and Scorpio do not like to be bored; they continuously need emotions.

The Scorpio man and the Aries woman often marry and very quickly. The level of passion is such that they do not have the strength to resist anymore. Difficulties in relationships will arise since no one wants to give in and compromise. There will be emotional quarrels and quite vivid reconciliation in the relationship.

Nicoletta is Aries, and Roberto is Scorpio. The couple met in 1980 in Rome’s Academy of Dramatic Arts. The two tied the knot in 1991. The partners got together ideally in love for the big screen and devoted their entire lives to professional cooperation. Their love is as successful as the Oscar Award-winning films they created together. This is where they put their souls and how they showed love for each other.

Joaquin is Scorpio, and Rooney is Aries. The two met on the set of Her in 2012. They really liked each other so much that he began to search for information about her on the Internet. The couple only corresponded, and it seemed to him that she did not like him, but it turned out that she was just shy. In 2016, they met again on Mary Magdalena‘s set, and this time they started dating after the film was ready. Mara and Phoenix got engaged in 2019. They went to film premieres together, received awards, and fought for animal rights together. In 2020, they announced that they are expecting their first child.

Fergie is Aries, and Josh is Scorpio. The couple met and started dating in 2004. Three years later, the duo got engaged. They got married in 2009, but just nine months later, news of Josh’s infidelity emerged. Despite this, the partners remained in a relationship and were expecting their first child in 2013. In 2016, the partners wanted a second child, but in 2017 they announced that they were separating. There were many reasons for their divorce. The couple had many disagreements that they could not resolve, and they also had busy work schedules. They tried to mend relations, but they decided to go each their own way in the end.

Jessica is Aries, and Gian Luca is Scorpio. The couple met around 2012. This day was fateful for Jessica because then she was nominated for an Oscar and met the love of her life. They dated for five years before they got married. In 2018, they had a child through a surrogate mother. He managed to change Jessica’s opinion about marriage and belief in a happy future. Gian Luca Passi de Preposulo is a true gentleman. Jessica does not disclose the details of their personal life but mentions him only with admiration.

Kate is Aries, and Owen is Scorpio. The duo met in 2006 on the set of You, Me and Dupree when Kate was married to her previous husband. In the same year, she announced a divorce, and in the fall, she and Owen officially met. There have been ups and downs in their relationship. In 2007, they broke up, and in 2008 they tried their luck again. Four months later, they parted again and Kate decided to be alone for a while. A year later, they met again, but she was already in a different relationship after four months. Even though they could not decide for a long time, they maintained good relations after the final breakup.

Mandy is Aries, and Ryan is Scorpio. They began dating in 2007, but Ryan was denying this fact and accused the press of libel. But as it turned out, the press knows a lot because, in 2009, the two got engaged and got married. The partners did everything to keep their life together closed to the public. They set up a mini zoo of animals at home because they are both into furry ones and always try to help them.

In 2015, they announced their separation, but their problems had only just begun. At the end of the year, Mandy requested support for herself and the animals because her husband’s earnings significantly exceeded hers. Moore later began to speak publicly about their relationship. About how she felt bad with him and about the psychological abuse on his part, which negatively affected her career. At first, he denied everything, but in 2020 he made a public apology. Moore did not understand why it was easier for him to do this than to apologize in person.

Keri is Aries, and Matthew is Scorpio. In 2013, the partners starred in a spy drama together. And after Keri’s divorce, rumors began to circulate about their relationship outside the set. However, in 2014, Rhys denied all these rumors. In March of the same year, they confirmed the news of their relationship. In 2016, they took another major step that took their relationship to a new level – they had a baby. The partners are still together, happy and raising a child, but no one is talking about the wedding yet.

Rhea is Aries, and Danny is Scorpio. The couple met and started dating in 1971. After ten years of relationship, both decided that they were ready to develop their relationship, and they got married in 1982. After the marriage, they had three children. The partners decided to split up in 2012, right after their 30th marriage anniversary but reunited a year later. In 2017, they decided to part ways again. It’s amazing how warm their parting was. The partners do not even think about divorce, although they decided to live separately. They absolutely agree on important things, love and support each other; however, they broke up after almost 50 years together.

Chip is Scorpio, and Joanna is Aries. They met in 2001 after graduating from college. He saw an advertisement with her face in his father’s shop and immediately fell in love. They talked for 30 minutes during their first meeting, after which he called and asked her out on a date. Dates followed one after another, and in 2002, Chip proposed to Joanna, after which he took her to a jewelry store to design a unique ring. They got married the following year and bought their first small house. For the next ten years, they were engaged in building and expanding their business until, in 2012, they decided to create their show about renovations and interiors. In the years that followed, they wrote memoirs, created goods, opened restaurants. The fantastic thing is that in this endless race for success, their family came first and they had five children. We wish them only success in everything and the same inspiration as all these years.

David is Scorpio, and Katharine is Aries. The couple met in 2006 when she participated in the American Idol show. After that, in 2008, Foster was invited to McPhee’s wedding, and in 2014, the couple divorced. Foster and McPhee’s friendship came to an end, and they were spotted having a romantic dinner as a couple in 2017, but they did not make an official appearance until the following year. Because of their big age difference, people condemned the two, but Katharine was never tired of saying how she loved and appreciated this person. They got married in 2019, and in 2020 they were expecting their first child together. There is a special connection between partners, and the difference of 34 years in age is not an obstacle to them.