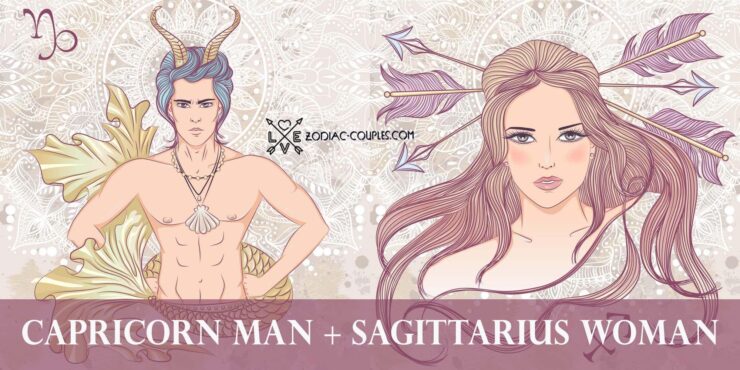 The Capricorn man and the Sagittarius woman are partners worthy of each other. A woman by nature is very active, positive, and cheerful. The man is very reliable and brings everything to an end, always finds a way out of the situation. Both achieve success in their careers, have the same understanding of the family, life, and home. Both partners are family persons.

However, it is not always ideal. Partners achieve their goals but choose different solutions. This is where conflicts may arise. Sagittarius is very persistent, spontaneous, and takes pressure. Capricorn is very reasonable and accurate; he will think a hundred times before taking action.

Despite this, the couple manages to find a common language. The relationship in this union is long and reliable; they are not bored together.

John is Capricorn, and Chrissy is Sagittarius. They met in 2006 on the shoot of a music video, and in 2011, John proposed to Chrissy in Malibu. They tied the knot two years later.

The couple has two kids, but it took a hard and long time since they had problems with conceiving their children naturally – unfortunately, they lost their third child just over halfway into the pregnancy. Chrissy coped with postpartum depression, and John always was by her side supporting and helping. They are happy together and gave each other a promise never break up.

Eddie is Capricorn, and Hannah is Sagittarius. The couple met when Eddie attended Eton College, and Hannah was in a boarding school for girls nearby. After a twelve-year friendship, their love began in 2012, and two years later, they tied the knot. They have two children together, and after these years, their love became only stronger.

Kaley is Sagittarius, and Karl is Capricorn. The two met in 2016 at a horse show. In 2017 Karl proposed to Kaley on her birthday, and the next year they got married. The couple is happy together, has mutual interests and hobby, and appreciate each other’s success. In 2017 Cuoco said to Us Weekly, explaining the perfect match of partners:

I like to torture him and he doesn’t get mad at me. He just lets me do it! I’m just constantly trying to rib him,” Cuoco joked. “He’s got such a great sense of humor. I like it when I’m bugging him, bugging him and then I finally get that laugh which just kills me. He’s just … I don’t know. He’s a real person and I think the big deal was knowing how much he loves dogs and horses — that’s always on my checklist. ‘Must love dogs’ is number one and he checked that off quite quickly and I fell very hard.

Unfortunately, in 2021 they realized that they are walking in opposite directions and decided to divorce.

Julianne is Sagittarius, and Bart is Capricorn. The couple met in 1996 on The Myth of Fingerprints set, the film that he was directing at that time. The two tied the knot in 2003 and have two adult children now. The secret to their long marriage is to really want to be together and get married. The craziest thing that does not fit into their heads is that more than 20 years have passed since they met, but nothing has changed for their feelings. They are still in love.

Ben is Capricorn, and Daniela is Sagittarius. The couple met in Hollywood and tied the knot in 2007. Few believed in the success and long-term continuation of this couple’s relationship since they have 30 years of the age difference. However, as we can observe, they have more than succeeded. They have been married for over 10 years, and their relationship with each other is still tender. Ben says that she is like an ancient princess to him, just as incomparable.

Miley is Sagittarius, and Liam is Capricorn. The couple met and started dating in 2008 on The Last Song set, where they starred. In 2012 Liam proposed to Miley when she was only 19 years old. Both of them were on cloud nine, but in 2014 they separated. The partners had other relationships, although, in 2016, there was a reunion of these two. Miley and Liam got married in a secret ceremony in their house in 2018. The fairytale didn’t last long, they filed for divorce in 2019, and in 2020 it was finalized.

Zoe is Sagittarius, and Karl is Capricorn. The couple met in 2016 at a bar. By the end of the year, they appeared in public together, which gave rise to rumors about their relationship, which later, by the way, were confirmed. In 2018, the couple got engaged in a homely atmosphere. The two got married in June 2019. They were delighted with the marriage and only spoke positively about the relationship. However, at the end of 2020, they decided to break up. The divorce is still pending.

Other Sagittarius and Capricorn famous couples