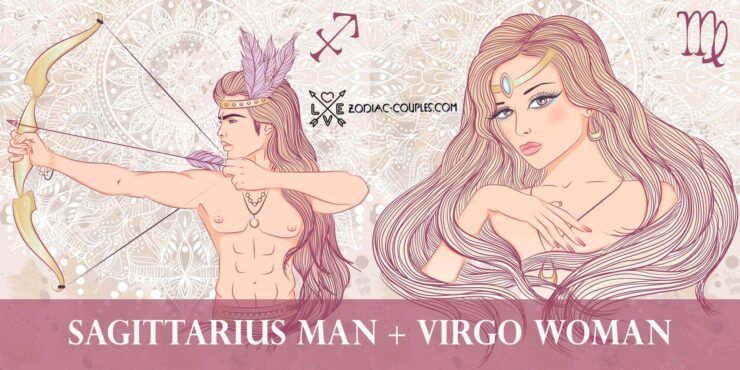 A Sagittarius man and a Virgo woman relationship cannot be described in one word since the outcome depends on partners’ many factors and decisions. Usually, a woman tends to choose someone as quiet and calm as her partner, but Sagittarius attracts her attention. He is bright, loud, cheerful, always in the spotlight, but not serious. A woman, on the contrary, tends to plunge into herself, fall into apathy and depression and take every little thing too seriously. Such a man is exactly what she needs to dilute her gray everyday life.

Relationship problems for these zodiac signs can arise when a Virgo woman tries to fix a man. She wants to make him more serious and organized, to influence his circle of friends and habits. The man is freedom-loving and will not tolerate this. And a woman, in turn, will not forgive treason. Even if the partners do not separate, it will still torment her.

Beyoncé is Virgo, and Jay-Z is Sagittarius. The couple met around 1999 when Beyoncé was only 18 years old, and a year later, they started dating. Their love relationship also bore fruit in professional collaboration. In April 2008, they tied the knot. In 2014, there were rumors that Jay-Z had cheated on Beyoncé, and he later confirmed this. The couple overcame this stage in their relationship and managed to keep their marriage together. The couple has three children and happily continued their married life.

Sophia is Virgo, and Carlo was Sagittarius. When they met, Sophia was only 16 years old. At first, he was her producer, and their relationship was extremely professional. He had a huge influence on her formation as a person, taught her manners, made her read books, and learn English. However, they later fell in love, and in 1957 Carlo went to Mexico to divorce his wife and marry Sophia. In Italy, their marriage was not legal, and they faced public censure. They left the country and acquired French citizenship so that Carlo could divorce. They married again in 1966. Before they could have children, Sophia suffered two miscarriages, but despite this, after a long treatment, they greeted two children. The couple lived together for half a century until Carlo’s death in 2007. He was her only love in her entire life.

Lara is Virgo, and Josh is Sagittarius. The couple met in 2003 when Josh came to the UK to study acting. They started dating, and four years later, the couple got married on Christmas Day. Their wedding was like a fairy tale in a 16th-century castle, and the couple spent their honeymoon in the Maldives. They had no children. She, like her husband, is a good actress and became famous for her role in Sherlock. However, when Josh started filming Once Upon a Time, he met his love there. Lara was initially in the dark, and then Dallas said that by the time he went to Vancouver, they had already parted. The couple divorced in 2011.

Jacqueline is Virgo, and Alexander was Sagittarius. The partners met in 1981 at a party in New York. Later he moved from the USSR to the USA. Alexander gave up dancing and ballet and decided that he wanted to build a career as an actor, but he had to get rid of the Russian accent in his pronunciation. Jacqueline supported him in every possible way, even though she was accused of ruining his career as a dancer. Years passed, Alexander became addicted, and Jacqueline insisted that he undergo treatment. He proposed to her, but the family and children were not included in her life plans, and the couple peacefully separated in 1988. He was her love, and his real love, according to Jacqueline, was his first wife.

Ed is Sagittarius, and Amy is Virgo. The couple first met in 1980 when Amy saw Ed play on stage in a play. Even then, she felt an incomprehensible attraction to him. Their next official meeting took place on the set of the movie Places in the Heart. Then the couple began dating, and two years later, they got married in 1983. In 1993, the partners greeted their daughter in marriage. Their fame does not prevent them from always prioritizing family. They are madly in love with each other, have repeatedly worked together professionally, and enjoyed it.