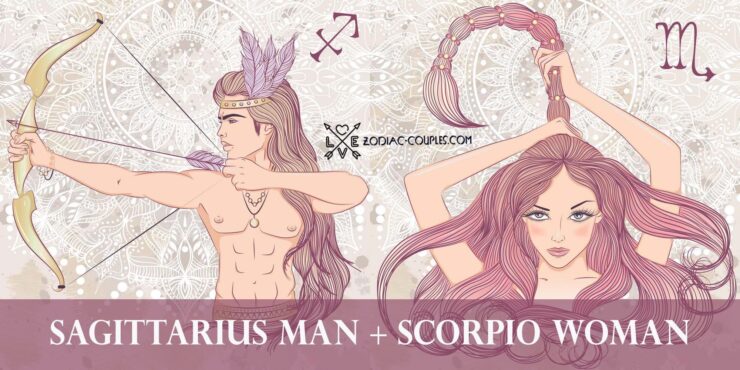 The union of a Sagittarius man and a Scorpio woman is a connection of two giants of human mind manipulations. They will not be bored together, and the relationship will not necessarily last long, but they definitely will be happy. There will always be hidden meanings in the communication of these zodiac signs. They are sensitive to the emotions of people and know how to influence them. Partners will constantly “catch up” and play in hot and cold. First, they are overwhelmed with passion and love, and then they begin to distance themselves.

The Sagittarius man and the Scorpio woman will constantly fight for leadership and dominance in their union. No one will want to concede. On this basis, conflicts will arise. A woman will be responsible for the atmosphere and mood in the relationship. They are both stubborn, but the man does not give up his position. Thanks to her well-developed intuition, the woman always knows how best to act in a situation and when it is better to give in.

Steven is Sagittarius, and Kate is Scorpio. They met in 1984 while filming Indiana Jones and the Temple of Doom. Steven was still married at the time, but Kate turned out to be the love of his life. He divorced in 1989 and married her two years later. The couple has seven children, including two from previous marriages and one child whom Kate adopted before Spielberg. Steven never stops admiring his wife. In Hollywood, he is the most successful, but he lets his wife lead him at home. They gave an excellent upbringing to all their children, and they achieved success.

Ruth is Scorpio, and Theo is Sagittarius. The couple met at the Bristol Old Vic Theater School and started dating in 2009. Their relationship and personal life are hidden from the public eye, so no one knows how he succeeded in winning Ruth’s heart. The two got married in 2018. Although their relationship has already been quite long, the union has no children. They spent this time on their careers, and it should be said – quite successfully with both. We wish the couple to continue in the same spirit.

Jack is Sagittarius, and Shannan is Scorpio. The actor and model started dating in 2011. Since then, they have expanded their family and welcomed two children: a daughter in 2013 and a son in 2016. The partners have been together for ten years, but they have no plans to marry. Apparently, they are one of those couples who do not need paper to prove their love and sincerity of feelings. On social media, partners share their personal life’s main news, but they did not disclose details.

Phil is Sagittarius, and Marlo is Scorpio. The couple met in 1977 when Marlo was a guest star on Phil’s talk show. Both later said about this meeting that it was love at first sight. They married in 1980, and Thomas became the stepmother of Donahue’s five children from their first marriage. The partners do not have mutual children. The secret of their long union, according to both partners, is their attitude to marriage. Both partners should initially want the marriage to be long since this affects all subsequent decisions and attitudes towards problems and sorrows on the path of life.