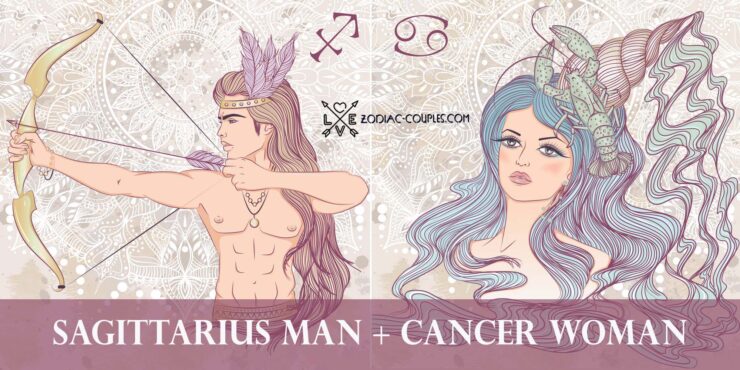 Astrologers consider the union of a Cancer woman and a Sagittarius man to be extremely hostile – Water VS Fire. Still, their relationship can also be extremely productive. It is known that with a strong desire, everyone can build relationships, regardless of the sign. Partners will have to do a tremendous amount of work to get their mechanism to work properly. The number of questions that they should discuss in advance will draw on a whole list.

The Cancer woman prefers home, family company, and peace. At the same time, the Sagittarius man is a fidget and is in constant search of adventure and something new. She needs to understand that it is the broad outlook of Sagittarius, his ability to communicate with different people, and his interest in life that makes him what he is – generous, successful, and intelligent. The fear that Sagittarius will have little interest in home and family, in Cancer’s love and communication, is completely baseless. After his adventures, Sagittarius will definitely want to return to the “safe haven”.

The Sagittarius man has so much optimism that Cancer’s mood next to him is much more good than bad. The woman blossoms in his company. She takes care of Sagittarius’s pride, respects him, tries to make everything in everyday life worthy of him. Sagittarius loves to be proud and brag – she will give him this opportunity.

To build a family, both signs need to do a lot of work on relationships and themselves personally to make sure it does not turn out that they just run in different directions.

Frances is Cancer, and Joel is Sagittarius. The couple met in 1983 when Joel was directing Blood Simple. Frances was auditioned for the role, got it, and refused. In the end, she starred in that film, and Joel became interested in her since she declined. They got married in 1984 and later adopted a son.

Joel and Frances are an example of a strong couple, as both are very successful and in demand. Their relationship is built not only on love but also at work. Frances starred in Joel’s films, and he, in turn, supported her a lot. They inspire each other and push to new achievements that they would not have dared to do alone.

Meryl is Cancer, and Don is Sagittarius. The couple tied the knot in 1978, six months after Meryl’s boyfriend’s death from lung cancer. In their marriage, they welcomed four kids, and all of them, like their parents, have chosen a creative path.

Meryl and Don are examples of pure, unconditional love. He is always by the side of his wife to witness her achievements and winnings. He is not famous but managed to build a brilliant career in his field without using his wife’s fame and a perfect reputation.

Nicholas is Sagittarius and Bryana is Cancer. They have been together since 2015, although their private life is kept under wraps – the couple managed to keep the pregnancy and the gender of the newborn child secret for some time. Now we know that they have a son and their loving bond seems to be strong and tight.

Dolores Fonzi is Cancer, and Gael García Bernal is Sagittarius. The couple first met in 2001 on Vidas Privadas set. In 2008 they started dating and in 2014 revealed their split up. They have two kids together. The press was shocked when they found out after their breakup that the couple was never married. As Gael García’s mother claims, the couple maintains a good relationship and co-parenting.

Giovanni is Sagittarius, and Mariah is Cancer. The couple tied the knot in 1997 and filed for divorce in 2001. They never commented on the reasons for their marriage and divorce. As it is cited in the document, the reason was irreconcilable differences. They have one child together, born in 1997.

Other Sagittarius and Cancer famous couples