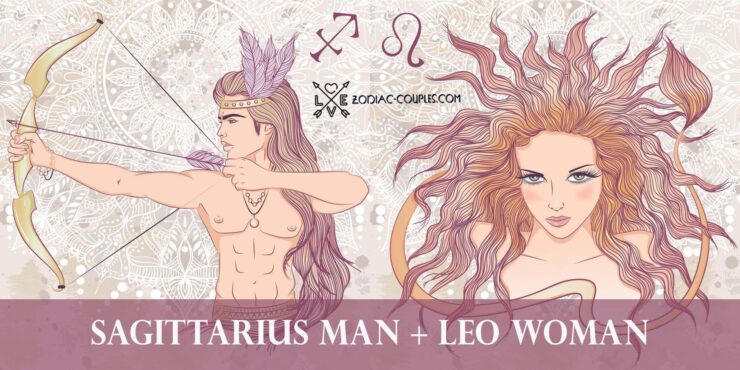 The main characteristic of the union of a Sagittarius man and a Leo woman is the absence of illusions, which helps their relationship develop well. Partners are adventurous, emotional, and active. They love risk and new experiences, and they will not be bored together. However, the zodiac signs are very stubborn, so conflicts will often arise. They stand their ground, do not like to compromise, admit guilt and make concessions. Patience and not demanding from the beloved one what he cannot give will help build long-term and harmonious relationships for partners. Accept that your partner is different and expresses feelings in another way.

The Leo woman needs compliments, romance, and attention: because of the shortcomings, she will suffer. The Sagittarius man needs support and acceptance. He does not like to argue and quarrel, so a woman needs to show restraint.

With children’s coming, a woman is wholly involved in motherhood and devotes all her free time to children. It takes time for a man to make new commitments. He will spend more time giving children everything they need for a happy and prosperous future.

Ben is Sagittarius, and Christine is Leo. The couple met on the set of Heat Vision and Jack in 1999, which wasn’t released. It was love at first sight for him. They tied the knot in 2000. The couple has two children who often took part in the filming of projects with their father. Christine also often starred in films with Ben, which he referred to as the best experience, since both get incredible pleasure from working together.

In 2017, the partners announced their separation, but they never officially divorced. The two are often seen together, and since 2018 there have been rumors that the partners have reunited; however, none of them confirm or comment on this. The couple officially broke up, but we hope they solved their problems and improved their relationship.

Charlize is Leo, and Stuart is Sagittarius. Their relationship began in 2003 and ended in 2010. To this day, this relationship is considered the longest and most successful in the biography of Theron. Not without difficulties. Their relationship was at a distance, and they constantly had to live in two countries, the United States and Ireland. Competition could also affect their couple since Theron was very ambitious, devoted almost all her time to her career, and went for the Oscar. After their separation, she adopted a child. Charlize also says that she is not easy to be with.

Don is Sagittarius, and Bridgid is Leo. Partners are together since 1992. Over the years they have welcomed two children and built successful careers. Although Don called her his wife in interviews, the couple has not been officially married for almost 25 years. They got married in 2016. After so many years of dating and two children, they made it official, and it looks like they are doing great.

Simon is Sagittarius, and Jocelyn is Leo. The two got married in 2007 and have two children. They produced We’ll Never Have Paris, based on their relationship and how Simon proposed to her. Much to Towne’s surprise, he decided to open this part of their relationship in a comic form. They seem to manage to combine work and family. Once in an interview, they said that they made two children and two films in two years. A sense of humor unites this couple.

Nick is Sagittarius, and JoAnna is Leo. They first met in 2009. After they met, JoAnna attended a professional baseball player’s game and was amazed. They got married in 2010 in a big ceremony. Having been married for over 10 years, the partners welcomed the two daughters together in 2013 and 2016. After the birth of her daughters, JoAnna devoted herself entirely to motherhood and marriage. They have absolute love in the house and a good mood.