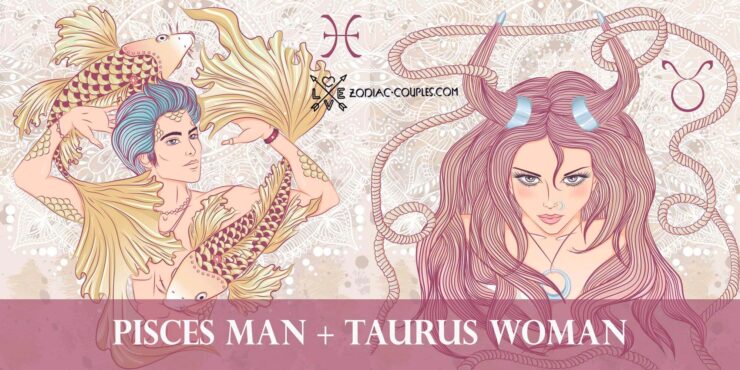 The relationship between a Pisces man and a Taurus woman has every chance of continuing. Still, they will have to work hard for it. Contradictions in a couple cause misunderstandings and quarrels between partners. A man and a woman seem to change places. He is very emotional, sensitive, and sentimental. It is very difficult for Pisces man to endure criticism and quarrels, and he quickly becomes depressed. He is not ready to take responsibility.

On the other hand, he accurately feels people’s moods and desires, which can greatly help him in a relationship. The Taurus woman, on the contrary, is restrained and does not understand the storms of her partner’s feelings. She supports the Pisces man, gives him care and warmth, provides life with everything he needs from food to shelter.

Penélope is Taurus, and Javier is Pisces. The couple met in 1992 on the set of the film Jamón Jamón. They did not pay attention to each other, but while working on the film Vicky Christina Barcelona, ​​the couple began dating at the end of 2007. The pair did not appear together in public for three years, but in 2010 they debuted and then secretly married in the Bahamas the same year. The duo now has two children. They do their best to keep their personal relationships out of the public eye so that everything theirs stays with them. The secret of a happy couple’s connection is also the separation of their relationship in the profession and life, as they often work together.

Christina is Taurus, and Geoffrey is Pisces. They met in 2007 and got married two years later. It seemed that this is a love story that will never end. The partners praised their marriage, led a quiet and calm life, and therefore never attracted much media attention. However, the news of their divorce in 2019 was like a bolt from the blue. Christina shared the news on Instagram, saying that they move on different paths but remain on good terms. The couple did not have children, but they had dogs that Christina had custody of. The divorce went fast, and the partners agreed quickly.

Emily is Taurus, and Josh is Pisces. They started dating in 2012. The couple did not talk about the relationship in interviews but did not hesitate to show feelings in public, for which they were often caught by paparazzi. In 2017, Josh proposed to Emily during a hike in the woods. And after a year and a half, the couple got married in the Bahamas with the closest ones to them. Emily began to think about children, but so far, these are only plans. Partners are enjoying their careers and so far have opted for a dog.

Adam is Pisces, and Behati is Taurus. The couple first met at Victoria’s Secret show. Adam was in a relationship with another model at the time. However, a year later, the two contacted again. Initially, at work, they communicated by e-mail, later work faded into the background, and they began to continue communication. In 2013, the couple broke up for a couple of months, making them understand how much they really need each other. In the summer of the same year, they got engaged, and a year later, got married. Now the union has two children together. They are happy and admire each other.

Laetitia is Taurus, and Stefano is Pisces. The couple started dating in 2003, and at that time, Laetitia already had a child from a relationship with a previous partner. With Stefano, they welcomed two children together. It was one of the most talked-about couples in the world of international cinema. For the sake of his beloved, Stefano took a desperate step, which was not easy for him, leaving Italy and moving to France to be with her. The partners were engaged. Their relationship lasted ten years until, in 2012, the public noticed that they began to appear together less and less. In 2013, they announced their separation and remained friends and parents, although the model was very upset about the split.

Other Pisces and Taurus famous couples