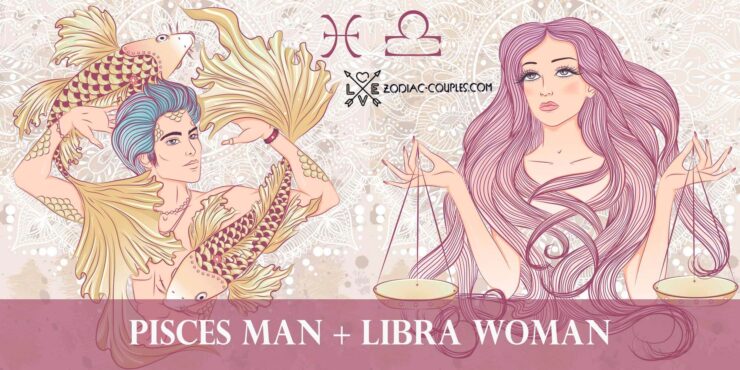 From the first meeting, the Libra woman bewitches the Pisces man. He sees her as light, gentle, feminine and admires her ability to communicate with people. She notices his gallantry and charisma and cannot pass by his deep eyes. There is something between these zodiac signs that immediately form a chemistry that partners cannot cope with.

Both signs of the zodiac are not conflicting and are not used to achieving their goals by placing pressure on other people. They could have a long and harmonious relationship where both are always inspired and succeed. However, there is one significant drawback in such a union. Both zodiac signs are used to relying on someone else to transfer responsibility and decision-making to a stronger and more experienced one. They can just get bogged down in laziness and stop progressing and comprehend new things. If measures are not taken in time, they will quickly cool down to each other due to unwillingness to work on themselves and their relationships, and they will separate. The key to a long and happy relationship lies in being honest with yourself first. Having stopped shifting responsibility, they will begin to develop in all areas.

Gwyneth is Libra, and Chris is Pisces. The couple met in 2002 at a Coldplay concert backstage. A connection immediately appeared between them, the relationship developed rapidly, and a year later, they got married. The couple had two children in the marriage. For Chris, this was the first serious relationship. In 2013, the couple began to break up; they tried to solve the marriage’s problems but failed. In 2014, they announced their separation, and two years later, the divorce was finalized. One of the reasons for the divorce was Paltrow’s postpartum depression. They became one of the first couples in Hollywood to introduce the term “deliberate separation.” The couple took care of each other’s feelings, divorced quietly, supported each other, and remained close friends and great parents.

Gwyneth moved on with another Pisces man – Brad Falchuk❤️. In 2014 their professional relationships turned to romantic and in three years couple got engaged. In 2018 they merged their families on the wedding ceremony in New York and then took a year before moving in together.

Chris, by the way, also started meeting another Libra woman – Dakota Johnson ❤️. Their romance is very private and they are rarely seen together, but it seems that couple was a n item since 2017.

Jim is Pisces, and Sigourney is Libra. The two married in 1984, and the couple has a daughter who was conceived through IVF, which created some problems in the couple’s relationship. However, the union has been together for over 35 years, which is considered an amazingly long marriage in Hollywood. The secret of their long-term relationship is that they are similar and suitable for each other, but not too similar since it would be difficult to live with your copy. Partners resolved problems and disagreements and sat down at the negotiating table rather than ran away from a solution. This helped them build a healthy marriage.

Daniel is Pisces, and Rachael is Libra. They met in 2003 at a bar, and their romance started the same year. After just five months, the couple became engaged, and in 2004 they tied the knot. The two have two children together. However, in 2019, Rachael announced the couple’s separation, and in 2020 Daniel filed for divorce. The couple prioritized children and did their best to ensure that divorce did not negatively affect them. Partners remain friends, parents and claim that they will always be in each other’s life.

Keleigh is Libra, and Miles is Pisces. The couple met in 2013 at the Black Keys’ Grammy afterparty, and a week later, Miles called Keleigh out on a date. Four years later, the couple got engaged on a romantic trip to South Africa, and they got married in 2019. Miles thought he left a strange impression of himself when they first met, but she found him sweet and charismatic. The couple has very busy schedules, so lockdown during the 2020 pandemic was good for them, and they spent time together doing their usual household chores.

Other Pisces and Libra celebrity couples