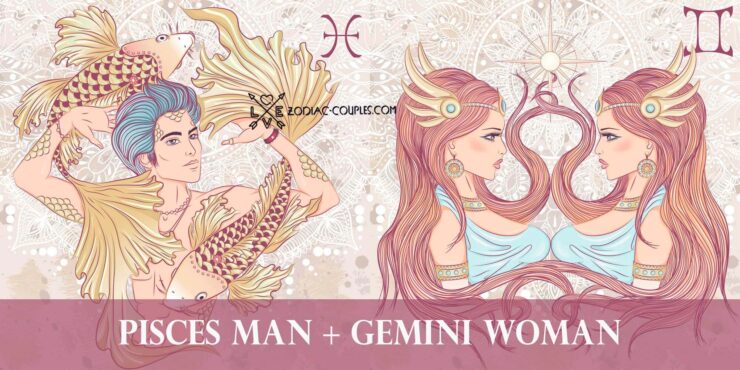 The union of a Pisces man and a Gemini woman will be built on mutual respect and understanding. However, these signs belong to different elements, which speak of different temperaments. A woman is extremely sociable and can find a common language with absolutely any person. A man is often closed and silent. Attempts by a woman to stir up a man can lead to conflicts and misunderstandings, but all problems can be solved.

Both partners do not like to be bored; they prefer to lead an idle lifestyle. These zodiac signs love communication and are very emotional. Relationships will be full of emotions, romance, events, and tenderness. The Pisces man and the Gemini woman are both very disorganized signs of the zodiac, so confusion and chaos will reign in their house. Of these two, no one would take responsibility. Jealousy can also cause quarrels since a man will not appreciate a woman’s sociability in society.

Heidi is Gemini, and Seal is Pisces. The couple met in 2004 in the hotel lobby, and Heidi seemed to be stunned. At the time, she was pregnant with the baby from her ex-husband, whom she divorced due to his infidelity. In late 2004, Seal and Heidi got engaged and got married half a year later in Mexico. In addition to a child from a previous marriage, the couple had three more children together.

In 2012, the world was shocked by the news of their separation. Everything seemed fine with them, but no one knows what is happening behind a closed door. The divorce was finalized in 2014, and the couple made children their priority and continue parenting together.

Bruce is Pisces, and Emma is Gemini. They fell in love with each other right after their first date. In 2009, the couple got married, and now they have two children. Heming is also a step-mother for his three children from a previous marriage to Demi Moore. Heming was the salvation of Bruce from loneliness. He has not been in a relationship for ten years, and he can’t even think that the reason for his misfortune is in the absence of a loved one. She breathed life into him. Now they are in close contact with a large family with Demi Moore and their children and spend all the holidays together.

Sheryl is Gemini, and Rob is Pisces. They met in the 1980s when Sheryl was dating his friend Emilio Estevez. Their next meeting was in 1989, and then the meeting became fateful. In 1991, the couple got married and never parted again. Before meeting Sheryl, monogamy was against Rob’s nature. He loved alcohol, parties, and girls, but after they met, everything changed. The couple has two sons. Marriage is hard work, and the secret of their long-term relationship is not to be shy about turning to psychotherapists for problem-solving.

Marco is Pisces, and Zoe is Gemini. The couple started dating in March 2013, and they got married in June of the same year. At first, the couple hid their marriage, but it was pointless to deny when they were seen with rings. They welcomed the three children they are raising without gender stereotypes. Marсo also took the last name of Zoe, and now they and their children have a double last name. The meeting turned out to be love at first sight for partners and turned into happy family life. We wish them all the best.

Justin is Pisces, and Kate is Gemini. The couple met while filming a video game commercial in 2012. Shortly thereafter, their relationship began with ups and downs until they got engaged in 2016. The two got married the following year. He almost missed his wedding as he had a baseball game in Los Angeles and a wedding in Italy and skipped training and came to the event itself. The couple has one child, and the most difficult thing for them was to choose a name.

Judy was Gemini, and Vincente was Pisces. They met in 1944. Their romance played a significant role in Garland’s later life and career. Vincente convinced her to change her image completely, hired makeup artists and stylists, which opened up new career prospects for her. The couple got married in 1945, and a year later, they had a daughter who became a star. However, Garland’s shaky psychological health, self-medication with sleeping pills, and amphetamine could not but affect the marriage. She had an affair and the couple divorced in 1952.

Other Pisces and Gemini celebrity couples