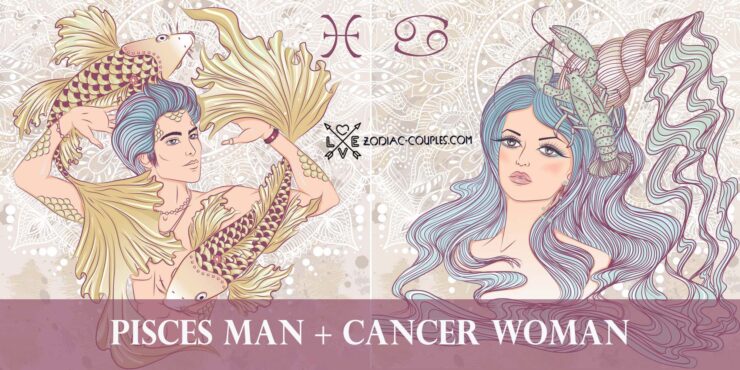 Pisces man and Cancer woman belong to the same element, which positively affects their compatibility. The union of these zodiac signs will be interesting, deep, and harmonious. Feelings are always a priority for both man and woman, so both partners are immersed in relationships and give all themselves. The characters of Pisces and Cancer complement each other. The couple understands each other perfectly, and a spiritual connection is formed.

Their relationship is light and sensual. These zodiac signs do not like to wait long, so they develop relationships very quickly and get married. Unfortunately, such a fast pace negatively impacts it, as partners do not devote enough time to get to know and accept each other. They are emotional and tend to change their minds and orientations often, which can be difficult. It is important for both Pisces man and Cancer woman to feel cared for and at the same time feel needed to help others.

Both Cancer and Pisces are prone to depression. They don’t like to fail, so they don’t finish things and fall into apathy. They are looking for complete support and understanding in a relationship. Partners often talk a lot, spend time dreaming about a common future. Suppose the partners manage to establish a mechanism of relationships. In that case, self-development, success in their careers, and a happy family life await them.

Johny was Pisces, and June was Cancer. The couple met at Grand Ole Opry in 1956. In the early 1960s, they started working together in the professional field and realized that they were falling in love. This was not the right time, as everyone had their own families. As a result, in 1966, Johnny’s wife suspected infidelity and filed for divorce; Carter also divorced her husband. In 1968, the partners got engaged, and after another 2 years, they had a common child. They continued to work together. Cash has said more than once that Carter helped him cope with his addictions and saved his life. They died four months apart in 2003.

Kurt was Pisces, and Courtney is Cancer. It is officially believed that the couple met in 1991. At the time, Kurt was overwhelmed by the dramatic fame and depression, and Love was the one who introduced him to heroin. Their relationship developed rapidly, and in just four months, she was already pregnant. Then they decided to get married in 1992. Kurt and Courtney were drug abusers, and she used heroin even when she was pregnant. Before their daughter’s birth, both tried to undergo rehabilitation and cleanse themselves of substances, but they began doing drugs again.

Their marriage was also not perfect, as they were constantly high, and Courtney began to think about the romance on the side. Cobain repeatedly tried to commit suicide, but the final attempt was a headshot on April 5, 1994, at his home. The reason was Love and his constant depression and fame, which he could not cope with.

Anna is Cancer, and David is Pisces. The couple met in 2001 on a flight to Cannes, and their relationship began that same year. This year Anna was hospitalized. She needed surgery and blood transfusions, and the doctors said that there would be problems with conceiving a child. Despite this challenging period, with which the couple successfully coped, they had a daughter together. The two did not divulge the details of their personal lives, but in 2010 the news of their separation thundered. Friends hoped that the partners would be able to solve their problems, but the split was final. As Anna said, they became friends in a relationship and spent too much time apart. Ten years after the breakup, they remain good friends and successfully cope with parenting.

Steve was Pisces, and Terri is Cancer. They met in 1991 and got married a year later. Their boundless love for animals united the couple. Steve proposed to her, not in the most romantic setting, but it was so for two. After a day at the zoo, they were sweaty and dirty, and he asked her that very question, to which she agreed. Their vocation to save animals has brought them worldwide fame. Steve died in 2006 from a stingray injury while filming. It is difficult to describe in words the grief that fell on Terry’s shoulders. After his death, she and their kids continued his legacy. A zoo in Australia has become open to visitors through a donation to the Irwin Foundation.

Other Pisces and Cancer famous couples