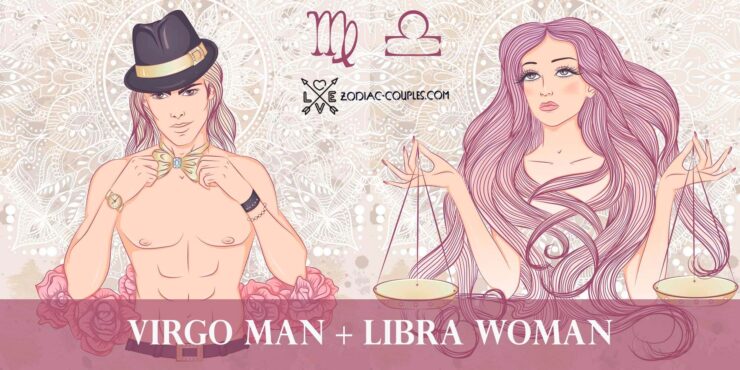 The union of a Virgo man and a Libra woman will be stable and reliable. Both zodiac signs are very conservative and traditional. They have every chance to build a long relationship. Both will not rush and try to do everything right, not missing a single important stage, starting from courtship and dating. The zodiac signs still have differences. The man is very rational and is guided by logic, and the woman is very light and fickle. Their characters complement each other, but still, they need patience to achieve a full understanding. The relationship is calm and stable, without undue emotions.

Between these zodiac signs, attraction arises from the first meetings, physical and emotional closeness. This is not surprising because their views on life are similar, and the couple understands that they can go through life in one direction. Virgo shows his love through care and love, and a Libra woman accepts it with pleasure. Lady Libra will become a muse and inspirer for a Virgo man. She will bring mood into his life and help him to achieve success with her influence.

Adam is Virgo, and Jackie is Libra. The couple met on the set of Big Daddy in 1999. During the filming process, feelings developed between the partners, and in 2003 they got married by the ocean in Malibu. After many years of marriage, the couple is still in love with each other, and they are just as respectful about marriage. Jackie is often present on the set of Adam’s films and often witnesses his kisses with other actresses while working. Surprisingly, she is absolutely not jealous, but on the contrary, suggests how best to do it for the film. The couple has two daughters.

Jack is Virgo, and Tanya is Libra. They had known each other long before they started their relationship – since high school. Then he only watched her from the side and could not dare to approach her. It took Jack 15 years to get up the courage. In 2005, the couple started a romantic relationship, and a year later, they got engaged. Just three months after, the union was married in March 2006. Jack and Tanya have three children, whom they are raising in the Jewish faith. She is a kindred spirit for him, and they are happy that in 2005 fate brought them together again at a friend’s birthday.

Sean was Virgo, and Diane was Libra. They met while working on the play Anna Christie. The couple got married in 1962 and welcomed their son a year later. Sean and Diane’s marriage did not last long since they divorced in 1973. Two years later, Sean married the woman he lived the rest of his life with; Diane also remarried. Even though she was a successful actress, after her marriage to Sean, she was only remembered as the ex-wife of Mr. Bond, which made her very angry. After marriage, she started accusing him of domestic psychological, and physical abuse and of expelling their son from his will. Sean denied everything, but his old interviews began to surface, confirming that he could do this with his ex-wife. Also, her friend gave interviews where he described how he saw her with bruises during the marriage.

Peter was Virgo, and Shera is Libra. He saw her on the set of Mikey & Nicky and could not pass by. He started a conversation with her and was completely involved. For her, it was not love at first sight, but Peter managed to win her heart. After their meeting, he decided to divorce his first wife, and after the divorce that was finalized in 1976, the couple married a year later. These are two temperamental people, so their relationship also had ups and downs. They repeatedly separated and reconciled, wanted to get divorced, and lived separately. But they still returned to each other and looked for compromises. Their relationship ended with Peter’s death in 2011 from Alzheimer’s disease and pneumonia. The couple had no children.

Hilary is Libra, and Mike is Virgo. The couple started dating in 2007 when Hilary was 19. In 2010, Mike arranged a stunningly romantic evening for two, where he proposed to her. After half a year, the couple got married, and in 2012 they welcomed their son together. They were very young and in love, but then their relationship began to decline. In 2013, they took a break, and in 2014 announced their separation. Hilary filed for divorce a year later, and it was finalized in 2016. She demanded only joint custody of her son, and the partners continue parenting together. One of the reasons for their divorce was the young age when they got married. Family life is constant hard work on relationships, and both were not ready for this.

Mark is Virgo, and Pam is Libra. The couple met at a party hosted by a mutual friend. Both partners at that time experienced a series of relationships and separations and did not want to fail anymore. Mark was determined that when he met her, he would not waste time. And so it happened, their relationship began in the spring of 1986, and in the summer, they got engaged. A year later, the couple got married, and then their family life started. The couple has two sons. After the birth of children, Pam completely retired from show business, and Mark made his work schedule the way he could spend more time with his family. The couple never reveals their marriage details, as everything said to the press is always used against you. The secret of their marriage, Pam says, is their past mistakes made before meeting each other because when their relationship started, both were already over 30.

Evan is Virgo, and Ashlee is Libra. The couple started dating and first opened their relationship to the public in 2013. Even then, they were in love and could not restrain their feelings. A year later, Ross proposed to Simpson, and in the same 2014, they got married. Ashley has a child from a previous relationship, and the couple decided to expand their family. They later welcomed two more children. The family has an amazing friendly relationship with kids and partners in every possible way, they support each other and their connection. We wish them all the best.