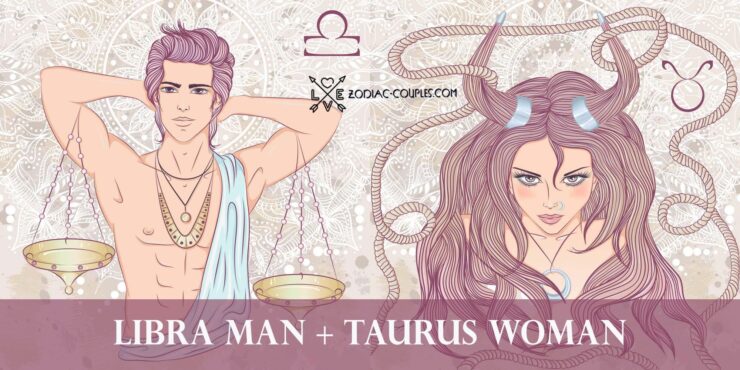 The union of a Libra man and a Taurus woman has excellent compatibility. These zodiac signs are ruled by Venus, thanks to which they have a lot in common. However, different elements indicate that they may have a different approach to the same things. Against this background, there will be frequent conflicts and misunderstandings in a couple, but these problems are quite solvable.

The attraction between a Libra man and a Taurus woman arises from the first meeting. They usually start a relationship quickly. Both zodiac signs are romantic, so their union’s beginning will be bright, interesting, and full of love. Partners complement each other with their different personalities, which helps decide on new experiences that they would not be able to get independently.

The woman will be the one who is the first to decide on the further development of relations and marriage, which will be a positive resolution for partners. The Taurus woman will take on all household duties with eagerness. There will be many quarrels and disagreements in the union. Still, these zodiac signs are wise enough to find compromises and solutions to problems calmly. Therefore, their disputes are the point of growth of the relationship.

Audrey was Taurus, and Robert was Libra. The couple met in 1980 at a party due to a mutual friend. Audrey was married to her second husband at that time, but meeting with Robert became like an electric shock. It was mutual love at first sight. He timidly invited her out on a date, but she said she had to work at night. Robert thought that she refused him so, but Audrey called and invited him to dinner the next day. After talking for an hour, the couple realized that they were meant for each other. As Robert later said, they met at the right time. Audrey told her husband, with whom everything was going wrong for a long time, about a new partner, and he supported her.

A joint career and relationship united the couple. They were not married but lived together in love and fidelity until 1993 when Audrey died of cancer. Robert was devastated. He said that although they say that time heals, it is not so. He was her last and strongest love.

Rebecca is Taurus, and Morgan is Libra. The couple met in 2014 while both were working on Broadway on the play Machinal. A year after the meeting, the couple got married. In 2018, the union welcomed the child together. Relationships between partners are not limited to home and family. They also actively cooperate professionally, constantly celebrating and praising each other’s successes. Relationships for them are also a process that requires persistence. Since nothing will work independently, both participants must invest strength, accept and support the partner.

Jesse is Libra, and Anna is Taurus. They met on the set of The Emperor’s Club in 2002. It didn’t take long before the couple started dating the same year, and their romance lasted ten years until they broke up in 2012. Anna was the only woman with whom Jesse went on dates, and after her, he took up charity work. He donated about $1 million to the fund where Anna’s mother worked. The couple rekindled their romance in 2015 with renewed vigor. Years later, they had a son, and in 2017 the couple got married and never parted.

Sofia is Taurus, and Spike is Libra. The couple met in 1992 when they were not yet famous. After the meeting, they began a long, strong relationship but solely friendly. At some point, Spike stopped being satisfied with that, and he made every effort to take their relationship to a new level. He succeeded, and the couple got married in 1999. The couple loved to consult with each other and praised each other’s work, but they could not cooperate since both were stubborn. The couple divorced in 2003. Sofia later said that this was her immature relationship, and he was not the person she would like to spend her life with.