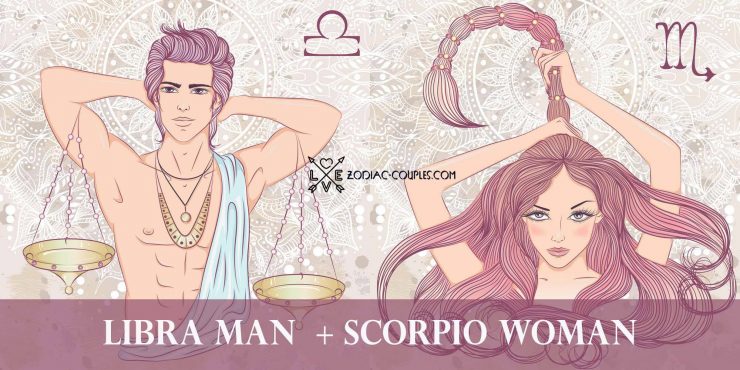 If we compare the personalities these signs hold on, then they have little in common. Scorpio woman is feelings, experiences, introspection. Libra man – reflections, dreams, ideas. Scorpio is more of a realist in nature with a bias towards pessimism (although he tries to seem optimistic in public). Scorpios figure out problems instantly. Whereas Libra can spin around and around, sorting and weighing options. But Libra is much more optimistic and positive in outlook on life – this is what Scorpio gladly takes from communicating with them.

At an early stage in a relationship, a Scorpio woman will feel his enthusiastic look on herself every minute. This flatters her vanity and makes her feel irresistible, and this is the easiest way to “buy” Scorpios. Gradually, partners realize that their life views and aspirations are fundamentally different – from preferences in spending their leisure time to attitudes towards a career and housekeeping.

Full compatibility and harmony in this pair are possible if both partners allow each other to remain themselves and follow their nature. The Libra man is impractical and little adapted to the reality. Being an intelligent kind-hearted person by nature, he is completely incapable of taking care of himself, achieving, insisting, and defending, if life requires it. And it is here that a Scorpio woman can coincide with him, like a puzzle. Her self-confidence and pressure are enough for two.

Goldie is Scorpio and Bill is Libra. They have met in 1975 on a plane, he was a musician and she was famous actress and still married. It was passionate romance as Bill wrote in his book, but Goldie wanted to see other men too, which Bill wasn’t happy about. Then she got pregnant and they married, because Bill thought that he could change her. They have two children, but in 1980 he walked away because of Goldie cheating on him. And at first this separation was amicable.

Later she met Kurt Russell and since then he raised her children and as Bill says, he was cut off this family.

Winona is Scorpio and Matt is Libra. They were introduced to each other in 1997 and was dating till 2000. They took their relationship under radar, but today they both say only good things about each other. Probably, they separated due to Matt’s longing to normal life which is hard when you are both super-famous celebs.

Ryan Reynolds is Libra (from Libra-Scorpio cusp) and Scarlett Johansson is Scorpio (from Scorpio-Sagittarius cusp). It’s hard to say how they met and how their story started, because they both remain tight-lipped about that. They began dating in 2007 and got married in 2008.

They divorced in 2010 and it was amicable split. There could be few reasons for that: Scarlett says she was too young and romanticed a marriage; she likes to keep her life private, while Ryan, as we see on his current relationship with Blake Lively (Virgo), likes to share the details of his life with the world; they both worked a lot; they are both stubborn and competitive.

Gretchen is Scorpio and Tod is Libra. They got married in 2004 and have two children. They don’t talk very much about their private life, but it’s clear that they are meant for each other.

💔 Earlier, Tod Williams was married to other female Scorpio – Famke Janssen, during 1995-2000. There is also not very much info about this couple, but they separated as best friends.