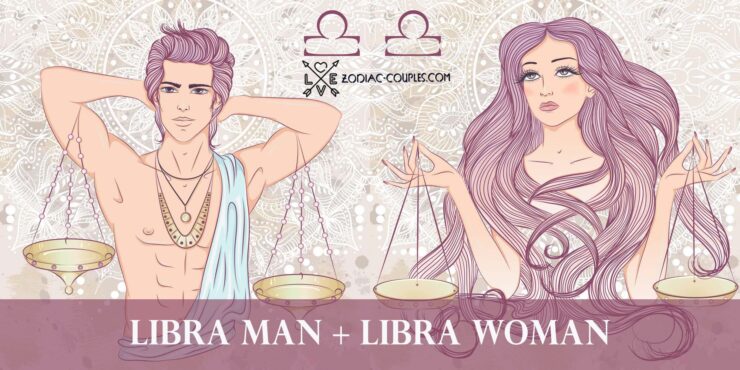 The Libra man and the Libra woman are two calm and romantic zodiac signs by nature. Accordingly, their relationship will be the same. Partners quickly understand that they have found the person they need and develop their relationships rapidly. Most often, this leads to marriage.

They are easy together, but they both feel insecure. For this reason, partners do everything to maintain peace and harmony in the relationship and avoid any conflicts. This approach can lead to the fact that Libras grow cold in relationships and lose interest because negative emotions do not go anywhere, no matter how far they are hidden. Because of this, they may part, but even parting is typical for Libra – peaceful and calm. As for marriage, this union has every chance of creating a happy and long relationship. The stumbling block can be partners’ unwillingness to take responsibility. In this case, they do not have a complementary relationship when one is the leader; here, both partners are passive and tend to give the reins to someone else.

Naomi is Libra, and Liev is Libra. The couple met at a costume ball in 2005 and immediately attracted each other. They had a date, and she went back to Australia. Partners corresponded by e-mail.

The union has two children together. In 2010, the couple was engaged, but they were in no hurry to get married since marriage was not their priority. Even though the union looked happy and strong, in 2016, they decided to part as a couple. They always mentioned the difficulties of combining career and parenting. Also, their relationship was analyzed continuously by the public, and the two were asked many questions.

Michael is Libra, and Catherine is Libra too. The couple met in 1998 at a festival where mutual friends introduced them. The meeting was not accidental since Michael already knew then that he wanted to be her children’s father. After three months, the couple confirmed that they were expecting a child, and a year later, he proposed to her. The couple tied the knot at the end of 2000.

In their life together, not everything was easy and perfect. His son was sentenced for drug trafficking, Michael had cancer, and Catherine was treated for bipolar disorder. In 2013, they decided to break in their relationship and figure out where to move on. Eight months later, the couple reconciled, and at that time, they already had two children together. The big age difference turned out to be not a problem for the partners, and they have been together for more than twenty years. They managed to pass all the tests and save the family.

Alicia is Libra, and Christopher is also Libra. They met and began their relationship in 1997. In 2004, Christopher proposed to Alicia with his grandmother’s ring. The couple tied the knot a year later and then had a son. Their relationship was considered one of the strongest in Hollywood. The couple looked happy raising their child, and in addition to their family, the two have collaborated on television several times. However, in 2018, Silverstone filed for divorce, citing irreconcilable differences and demanding joint material and physical custody of the child. The divorce’s real reason was not disclosed, but the decision was mutual, and the partners parted on a peaceful note.

Catherine is Libra, and Marcello was Libra. When the partners met, both were married and had their own families. Marcello did not divorce his wife for religious reasons, and Deneuve divorced only two years after the beginning of an affair with Marcello. They began their relationship in 1970. The couple had a daughter in 1972. In general, they lived together until 1975 and later separated. Deneuve called him the love of her whole life. After parting, the partners became good friends and constantly talked, but their daughter saw them together, it seemed, only on TV.

Bradley is Libra, and Amy is Libra. The couple met in 2014, but Bradley was in no hurry in his actions, so the two started dating only in the summer of 2015. In the same year, they already made their public debut as a couple. In 2018, the partners confirmed their engagement, and after years they tied the knot. Initially, Amy was not attracted to Bradley, he seemed to her an arrogant actor, but he turned out to be exactly the person she needed. As she said, she apparently has bad taste if she could not immediately recognize her love for him.

Brie is Libra, and Alex is Libra too. They started dating in 2013 and were introduced by mutual friends. The partners immediately found something that connects them, and that was music. Brie was in awe of her partner and relationship and talked about this constantly in interviews, while Alex was more modest in showing his love in the public. The couple got engaged in 2016 in Japan. However, in 2019, news emerged that the couple broke off their engagement, and they no longer appeared on each other’s social networks. Despite this fact, the partners remained in close relations.

Kamala is Libra, and Doug is also Libra. The couple met in 2013 on a blind date, and for Doug, it was love at first sight. They did not waste their time and got married a year later, and she became a stepmother to his children, who accepted Kamala very well. Doug has actively supported and still supports Kamala in her political career, is always there, and shows pride. He also decided to quit his law firm to devote himself to the role of a gentleman.