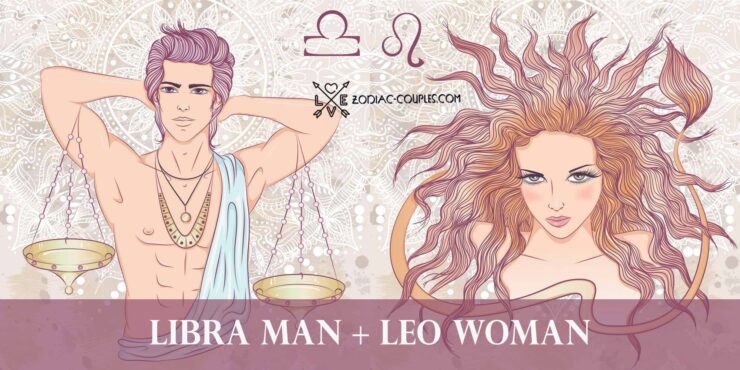 The relationship between a Libra man and a Leo woman will be long and harmonious. The signs will show tenderness, care, affection, love, and understanding. The signs balance each other. Where a Leo woman shows excessive persistence, a Libra man manages to pacify her with ease. A man will often sink into depression, self-doubt and doubt. A woman will give him strength, faith in himself, understand and support. He will become more determined and will go in the direction of his dreams. A Libra man will manage to conquer a temperamental Leo woman. She is very quick-tempered and emotional, and he will give her peace and tranquility. Quarrels in a couple are rare, as a man manages to reduce all negativity to a minimum and in time to recognize the impending storm in the lady’s mood.

The marriage between partners will be successful, but one will have to insist on a decisive step. The man will take on all responsibilities for the financial and emotional security of the family. A woman is an excellent housewife; there will always be comfort and cleanliness at home. Children will grow up in a supportive environment.

Alice is Leo, and Ioan is Libra. The couple met on the set of 102 Dalmatians in 2000 when Alice was engaged to another person. Although, after the call off of the engagement, these two started dating. The union got engaged seven years later on New Year’s Eve since Alice said that she’s not going to date him anymore unless she is his wife. In 2007 they tied the knot. Her determination helped their relationship move forward and develop, and now they have two children.

Update: as of March 2021 Ioan filed for divorce and this caused confusion and sorrow in the family. Unfortunately, it’s going in a non-pleasant way now.

Anna is Leo, and Stephen is Libra. The couple met on the TV series set True Blood in 2007 and a couple of months later started dating. They kept their relationship under wraps for a year. The two got engaged in 2009 and tied the knot the next year. They have two children, twins. Their connection is substantial; partners support each other at work, parenting, and are best friends. Their mutual decision was to keep their personal life and children private and from the public eye.

Annie is Leo. and Paul is Libra. The couple met in 2005. Their first meeting was so successful that many others followed until they fell in love. The partners keep their private lives behind iron curtains, but it is believed that they got married the same year they met. The couple has two children: a boy and a girl. Annie and Paul have never been involved in any scandals, and there are no rumors about their divorce or fights. It seems that the partners are doing great in family life.

Jimmy is Libra, and Rosalynn is Leo. The couple met in 1945, and Rosalynn fell in love with him after seeing a photo of him in military uniform. They kissed on the first date, contrary to her principles, and got married in 1946. Because of the wedding, she had to sacrifice her studies, but she was not upset. They have four children, and all were born in different states, as Jimmy frequently moved in the service. This couple went together through fire and water, Rosalynn has always been there, supporting her husband, and together they reached unprecedented heights. They have broken all records and are the longest-running presidential married couple in the United States. Despite their advanced age, because both of them are over 90 years old, they are all the same positive and still always together.

Bruce is Libra, and Patti is Leo. They met in 1980 at a bar, before Bruce’s career was so successful. In 1984, Patti became the only female backing vocalist in his group, but at that time, there was no relationship between them. Their chemistry began after Bruce’s divorce in 1989.

They got married in 1991, and during their marriage, they welcomed three children. The partners often performed together and were inseparable. The secret of their happy marriage is that Patti understands Bruce like no one else and has always supported and helped him fight against depression.

Matt is Libra, and Luciana is Leo. The couple met in 2003 at a nightclub in Miami. He then starred in the film, and she was working as a bartender when the film crew came to the club to relax. A connection immediately arose between the partners. In 2005, the couple got married in a modest ceremony, and eight years later, they renewed their vows. The couple has three daughters together. Their relationship is strong, and she is his constant support. At the beginning of 2021, the press had speculations that the couple would divorce, but these turned out to be only rumors.