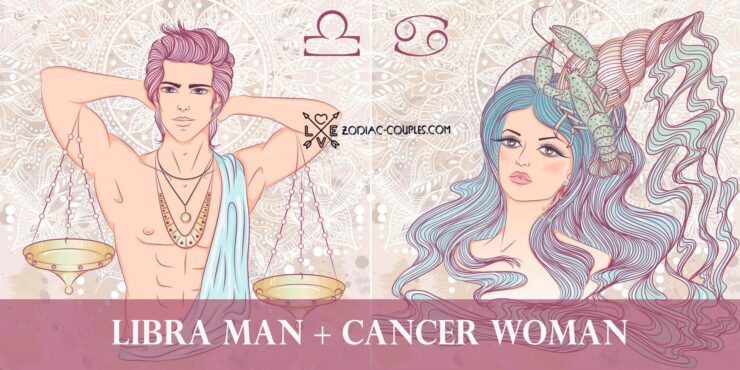 Those two belong to different elements, where the Cancer woman is the representative of the Water, and the Libra man is the Air. As a result, a man craves attention and social activity, and his woman is more striving for home comfort. She may not like the man’s plan to lead an active, eventful life. Most likely, the guy will call her, the Cancer girl who likes solitude, boring.

Libra and Cancer can be together if they have enough patience, understanding, and the ability to hear each other. Their horoscope says that this marriage has a good chance of becoming successful. Both of them are family-oriented and want to be caring spouses and great parents. Only mutual willingness to compromise, responsiveness, and their gentleness of characters help.

A couple of woman-Cancer – Libra-man is able to saturate the relationship with tenderness and romanticism. In the hectic pace of life, they do not forget about each other; they always find time to be alone. An “airy” man knows how to please his beloved woman, starting with the material things, ending with just verbal support, which is so necessary for the vulnerable Cancer. She will gladly ennoble the house, making it a nest, to which Libra always wants to return.

Pamela is Cancer, and Tommy is Libra. They met in 1995 and just four days after the meeting got married. This union turned out to be stormy, but not long. The marriage brought them two sons. The couple was known for its scandals, and in 1998, they divorced. However, their impulsiveness did not allow them to leave. They were splitting up and making up many times over the next decades.

Michael is Libra, and DeAnna is Cancer. They started dating in 1994 and got married in 1996. Marriage with DeAnna is the third in his life, but it lasts much longer than the first two. Michael and DeAnna have been together for 24 years and have three beautiful sons together and three from previous marriages. He is already 63 years old, and she is 60. Isn’t this true love?

Courtney is a Cancer, and Brandon is a Libra. They dated for three years before deciding to get married. In 2007, the couple made it official, and in 2012 they had a son. It would seem a classic story, but even after so many years of marriage, they get along well, love each other, and even work together. In the Legends of Tomorrow, they played Ray Palmer and Nora Darhk.

Other famous Cancer and Libra couples