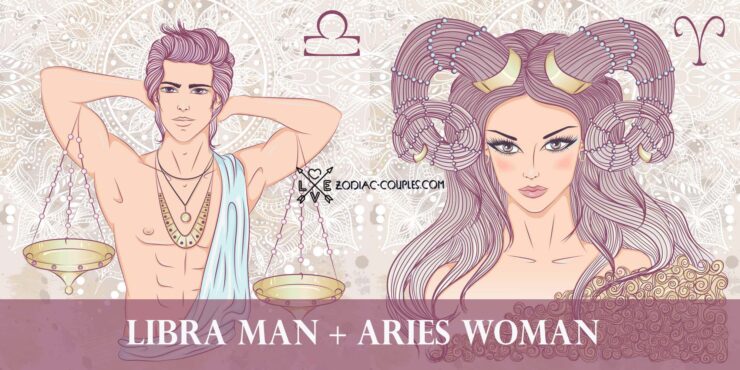 According to the horoscope, the union of the Libra man and the Aries woman can be one of the happiest. Yes, they are opposites, but they perfectly complement each other’s needs in a relationship.

The Aries woman is active by nature, while the Libra man is passive. He is a little shy, but she takes the initiative for two. The couple is very comfortable together. The man manages to provide exactly the care and attention to the woman that she needs. Others may not understand their relationship. It may seem that Libra is playing the role of a woman, but this may be exactly the scenario in which those zodiac signs feel comfortable.

Aries and Libra each feel great in their familiar environments, but when they have to bring their world and accept someone else’s, true chaos may begin. The irreconcilability of their characters sharpens conflicts and creates new problems. It is possible to solve them only if both partners can negotiate and allow each other to remain themselves. Attempts to teach and change the partner will ruin this union. The desire to understand, delve into the partner’s world, and take out something valuable for themselves will help make marriage the strongest one.

So, with strong feelings and the ability to learn to yield to a partner, they can teach each other a lot. Libra, being a skillful diplomat, smoothes rough edges. Aries eradicates Libra’s indecision, teaches him to achieve goals. Libra usually generates ideas, and Aries propels them forward.

Mariah is Aries, and Nick is Libra. The couple’s relationship developed rapidly. Mariah and Nick got married in 2008 after six weeks of dating. This news shocked the audience. In 2011, the couple had twins, but already in 2014, Cannon filed for divorce. As with any divorce proceedings with children, it took two years. Despite a short marriage, the couple managed to maintain strong friendships and raise children in an atmosphere of love.

Breaux is Libra, and Katy is Aries. This happy family began with love at first sight when the athlete worked with Katie as a trainer in 2014. Two years later, the couple got married and soon had two children. Braux and Katy live happily together, and they seem to be doing well.

Keira is Aries, and Rupert is Libra. The couple met in 2005 on the Pride and Prejudice set. Their relationship lasted five years until 2011 it became known about their separation. It was a difficult time for both. Keira went headlong into work and refused to comment on anything. Both were heartbroken, but it was a mutual decision. Keira’s close friends said that the couple could not withstand the press’s pressure and be constantly in the public eye.

Brynn was Aries, and Phil was Libra. Unfortunately, their marriage story could be a script for a horror movie.

The couple got married in 1987 and had two children. Friends say that Brynn was the “woman of his dreams“.

She was a former model, and he was a successful actor. But Brynn could not come to terms with Phil’s success and could not find how to fulfill herself. It is known that she abused drugs and alcohol and periodically went through rehabilitation. The family’s entourage noticed that Brynn sent threatening letters to the family friends because of her furious jealousy to husband, but he never thought of divorce.

One day after another evening with friends, Brynn, while being drunk, shot Phil in his sleep after a strong quarrel with him. By the time the police arrived, she had locked herself in the bathroom and committed suicide.