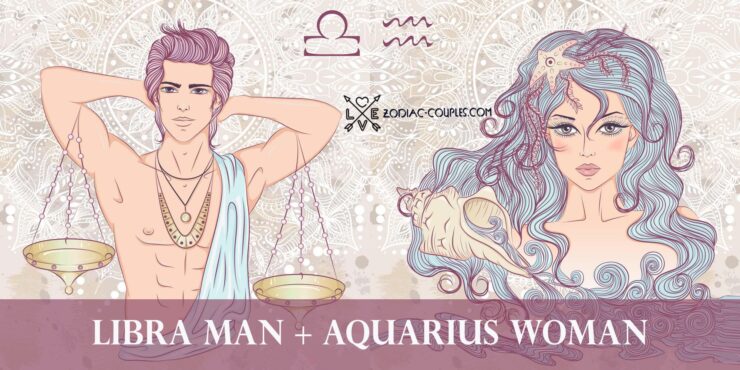 Libra man and Aquarius woman belong to the same element – air, which positively affects their compatibility. The element also describes the zodiac signs’ relationship since it will be only light and relaxed. Partners are interested in each other. They always find something to talk about and how to spend time. In the relationship, romance will prevail, which they will be able to maintain even after years. Love will be tender, strong, and long.

When the zodiac signs first meet, it is the Libra man who is the initiator. He is the first to realize his feelings and tries to find an approach to the lady, and for some time, she does not take the man seriously and hovers in the clouds. Partners develop their relationships in stages and do not rush things. Having filled themselves with romance and evening dates, these zodiac signs begin to weigh the pros and cons of marriage. Their serious and knowledgeable approach to marriage ensures them a long life together. The union is rarely divorced. The decision about children also does not come spontaneously, and they prepare for family expansion in advance.

The relationship between a Libra man and an Aquarius woman is based on mutual understanding and respect. They avoid sharp corners and always try to find solutions to problems and conflicts.

John was Libra, and Yoko is Aquarius. The couple met in late 1966 at a gallery where there was an exhibition of Yoko’s works. A spark immediately appeared between the partners, and they started dating. After three years of relationship, the two got married. The Beatles split up a year after John and Yoko’s wedding. Their relationship was very controversial, and the surroundings did not like them being together. When John and Yoko met, they were both married. And their whirlwind romance and betrayal of partners led to divorces. It is also believed that her appearance in his life influenced the Beatles and the fact that the group stopped existing a year after their wedding. Partners often quarreled, and Lennon cheated on Yoko. However, after his tragic death in 1980, Yoko is believed to be the one who maintains his memory. The couple had a son.

Geena is Aquarius, and Jeff is Libra. The couple met in 1985 on the set of the horror-comedy film Transylvania 6-500. Their romance quickly flared up. The partners felt comfortable being together, fun and interesting. Both enjoyed cooperating in projects. They got married in 1987, and the couple had no children; however, they were planning. The two devoted too much time to their own careers, so the time of parenting never came. In 1990, the couple suddenly filed for divorce, but they maintained good relations and met after the divorce, as it is known.

Sacha is Libra, and Isla is Aquarius. The couple met at a party in 2002, and for Cohen, it was love at first sight. The couple kept under wraps their relationship, and in 2004 announced the engagement. Fischer decided to change her religion to be united with her husband. The partners tied the knot in 2010 in an intimate ceremony. The couple has three children together. Cohen had a positive impact on Fischer’s career. When she was no longer invited to dramatic roles, he advised her to change direction, and she became a comedian. The union prefers to keep their children’s lives private and values their own privacy.

Keeley is Aquarius, and Matthew is Libra. The couple met on the set of Spooks in 2002. For both, it was love at first sight. Then their relationship started, and they were dating for two years until they decided to get married. The partners tied the knot in 2004 when Keeley was seven months pregnant, and the couple was expecting their first child together. Now the union has two children. The secret of their marriage is that they feel safe together, and both enjoy being married.

Chris is Libra, and Dawn is Aquarius. The two met in 2009 when a mutual friend introduced them. Chris immediately had sparks of love for Dawn, but it was not a mutual thing. She turned down his Facebook friend request three times. And yet, he managed to break the wall between them, and in 2012, the couple got married. The two have three children together now. Dawn says she met her husband in the darkest time of her life, and he helped her a lot with it. They are among the most hilarious and funniest couples in Britain and continue to enjoy each other’s company and share funny parenting stories.