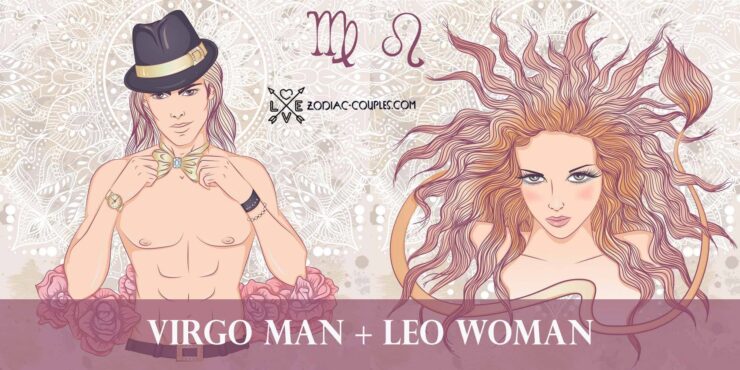 Leo woman and Virgo man are next to each other in the zodiac. It is quite rare when such signs are well compatible. At first glance, it may seem that they perfectly complement each other, but is this really so?

The Leo woman is truly a queen and requires an appropriate attitude towards herself. She really loves approval, to be admired for her beauty, as well as a lot of attention and care. It seems that the Leo lady wants to care, and the Virgo man wants to take care of someone. What can go wrong?

Virgo tends to criticize everyone around, while Leo hates criticism (remember that she is regal and gorgeous?), so Virgo is in constant tension, choosing the right words in communication with his woman.

The Leo woman is a born leader, and she should leave this quality at work. Even though Virgo is very calm, he doesn’t like to obey.

Jennifer is Leo, and Marc is Virgo. The couple met in 1998 when Jennifer was about to marry Ben Affleck. After a painful break-up in 2004, she married Marс. Jennifer later stated that she was looking for support and thought that she met her destiny. The famous couple announced their separation in 2011, and in 2014, the official divorce ended. Jennifer and Marс had twins in 2008. The couple is known to have remained good friends and parents and are often seen together at their children’s school events.

Guy is Virgo, and Madonna is Leo.

This is one of the most talked-about couples in show business. To this day, the press is trying to figure out the reason for their divorce and who was to blame. Madonna and Guy got married in 2000, after the birth of the first couple’s child. The relationship quickly became known as toxic in society. The close circle of the famous couple noticed their constant quarrels and showdowns. In 2006, they adopted another child, at which time they were already in the process of breaking up. In 2008, the celebrities officially divorced.

Madonna is a strong workaholic and careerist. When she met her future ex-husband, she was at the peak of her popularity. Their conflicts often arose against the fact that Madonna literally overshadows Guy and the public perceive him as her complement. She was often out, which caused disputes over raising children and her participation in family life.

Armie is Virgo, and Elizabeth is Leo. The couple tied the knot in 2010 and have two children. In July 2020, they officially announced their split up. It wasn’t the first time of the separation. In the fall of 2019, Elizabeth wanted to file for divorce, and both these times, the reason was the same – Armie’s “hot texts” for another woman. The couple tried therapy to resolve their problems, as we can see, the root of the issue hasn’t been found.

Charlie is Virgo, and Brooke is Leo. The couple got married in 2008. They have twin sons. The couple filed for divorce in 2011. Charlie was accused of assaulting his wife on Christmas Day. The divorce didn’t go so easily as Brooke fought for sole custody of the children. It is known that the police took the children from Charlie’s house due to his abnormal state of mind, and Brooke also received a ban on her husband’s approach to the children.

Kevin is Virgo, and Jaime is Leo. The couple got married in 2013 after about a six-year relationship. In 2015 Jaime gave birth to two beautiful daughters. As we can see from Kevin’s social media, he is on cloud nine. The couple is happy together and tries to keep their relationship private as much as possible.

Greta is Leo, and Noah is Virgo. The couple has never been married. They are dating since 2011, and in 2019 Greta gave birth to their son Harold. During this time, the couple worked together on projects many times. It is believed that their relationship has a positive effect on both partners’ success.

Meghan is Leo, and Harry is Virgo. The couple met in the summer of 2016 on a blind date arranged by a mutual friend. In the first two months of dating, their relationship had already become quite serious. In the fall, it became known that they were a couple. She was filming Suits at the time, and Harry went to visit her in Toronto. When Harry decided to publicize their relationship in the press, he quickly changed his mind, as insults fell on Meghan and he wanted to protect her.

In November 2017, the couple got engaged, and in May 2018, they got married. In May 2019, they welcomed their first child, and in the fall, announced that they wanted to take a six-year break from royal duties. In early 2020, they decided to move away from the royal family due to a lack of support and understanding from the media and the royal family. Their independent life began successfully. The couple bought a house and founded a production company, and signed an agreement with Netflix. Markle later reported that their union suffered a miscarriage in the summer. In March 2021, they gave an interview to Oprah in which they talked about the pressure they faced from the royal family and also announced that they were expecting a second child.

The couple has come a long way in their struggle for independence and the well-being of their family.