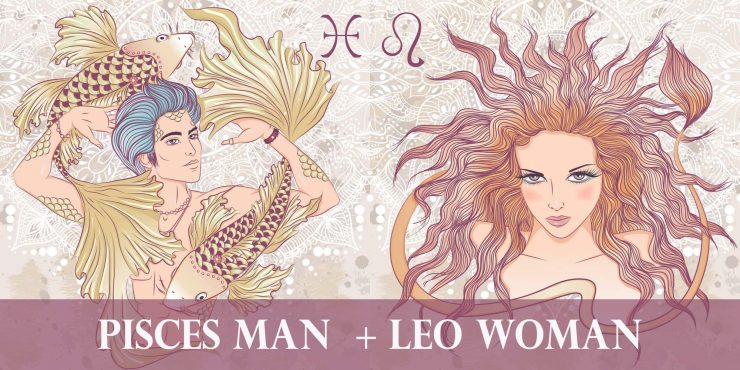 Pisces man will not get tired of admiring the Leo woman and shower her with compliments, and she will bathe in the love of Pisces and regally accept worship. The main condition for a long relationship is that the Leo female does not get tired of being a constant leader and carrying all the responsibility on herself and that in Pisces suddenly does not wake up “male pride”.

He will really like that she takes responsibility in all matters, is proactive, brave, and ready to patronize Pisces and take care of him. The Leo woman will win Pisces’ strong affection by solving many issues and giving Pisces man a sense of security.

In an ideal couple, the Leo lady does not complain of how tired she is of constant responsibility, she likes the dominant role in the family. Many couples of Leo and Pisces parted precisely at this stage: the female Leo began to miss a strong man nearby, or she began to “pull” everything on herself, instead of enjoying life. In an ideal couple, the Leo woman enjoys being in charge and realizes that it gives her a chance to be realized in society.

Kate is Leo and Len is Pisces. They met in 2003 on the Underworld movie set. At that time Kate was in long-lasting relationship with Michael Sheen, and Len was married. In 2004, after both separated from their partners, they tied a knot. It was cute couple, but in 2016 Len filed for divorce, which was finalized in 2019. There was no drama and apparently they just have grown apart.

Angela is Leo and Courtney is Pisces. They both attended drama school in 1980s, but were just familiar with each other. Only later in 1994 their paths crossed and there was a date which they recall as “not memorable”. Nevertheless, there was a second date and it evolved in marriage that lasts since 1997.

They have two kids, wrote a book together, starred together in a play. They say that their secret to successful marriage is to listen to each other and negotiate.

Benicio is Pisces, and Kimberly is Leo. The partners had a relationship that could not be called a meaningful relationship over the years. In 2011, Kimberly got pregnant, but they were not married. She wanted to start a family and live happily and wanted Benicio to marry her. Still, when she told him the news of her pregnancy, he said it was just an affair. He did not plan any serious relationship with her but agreed to support the child. Then the couple broke up, and the child was born when they were no longer together.