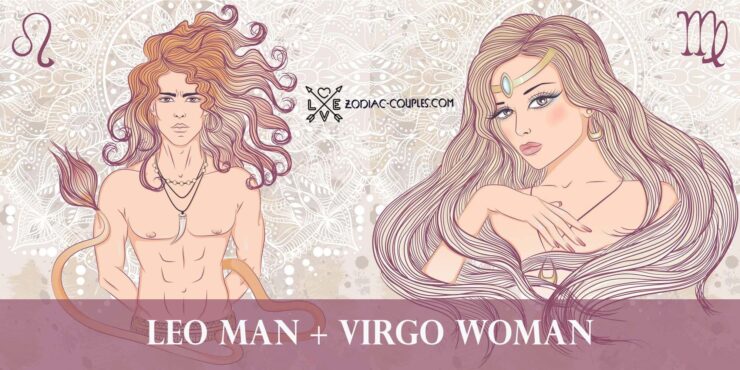 It will be difficult for a Leo man and a Virgo woman to build a relationship because they are complete opposites. Their characters and outlook on life are radically different, and, unfortunately, they do not complement each other. The Leo man is very open, emotional, and ambitious. The Virgo woman is very private, calm, and hardworking.

If the partners will be interested in each other and initially this difference will seem tempting, it may later cause conflicts. They want to spend time differently and perceive the world differently. A Leo man will try to fill a woman with energy, make her active and cheerful. He will be angry because she wants to relax and be understood and accepted as she is. Naturally, with his ego, Leo will be mad that his efforts are not appreciated, and Virgo woman will not understand how she managed to upset the man.

Their relationship will be like a roller coaster, and on the verge of separation. Suppose the union wants to maintain this relationship. In that case, they will have to do a great job, learn acceptance, respect, and obedience.

Daniel is Leo, and Erin is Virgo. The couple met in 2012 on the set of Kill Your Darlings. There was a bed scene in the film where the actors showed a genuine passion because there was already chemistry between them. For both, it was love at first sight. They are perfect partners for each other. Both are boring and closed and enjoy it. Their favorite entertainment is karaoke and ping-pong. They also are not fashionistas. The two are always dressed as dull as possible, so the paparazzi are tired of chasing them.

Alexa is Virgo, and Carlos is Leo. The couple got engaged in 2013, and Carlos designed the wedding ring for her by himself. They got married in 2014 in a circle of the closest ones. The partners chose a surname for their young family, which consists of both of their previous surnames. Now the couple has two children, and in 2020, they announced that they are expecting a third baby. The partners are happy together, and apart from family, they enjoy working with each other professionally. Working together is much more comfortable for them than with strangers.

Kareena is Virgo, and Saif is Leo. The couple fell in love on the set of Tashan; although this was not their first meeting, it was the one when their long romance began. Saif got a tattoo with the name of his beloved in Hindi. In 2012, the couple decided to take the next step, and they got married in a private ceremony with the closest ones and without photographers and paparazzi. The couple has two children. They also work and collaborate and are believed to be one of the most romantic couples in India.

Linda is Virgo, and Hulk is Leo. The couple met in the 1980s at a restaurant through a mutual friend. For about two years, the couple’s relationship was at a distance, after which they got engaged and tied the knot in 1983. In the marriage, the couple had two children. The partners lived together for over twenty years, after which Linda filed for divorce in 2007. Then the drama began between the two. The Hulk said that it was unclear why his wife filed for divorce but said she had discovered his infidelity. The divorce ended in 2009, but legal battles continue to this day. Partners are not able to share the assets, and Linda cannot receive all the payments she requires from the Hulk.