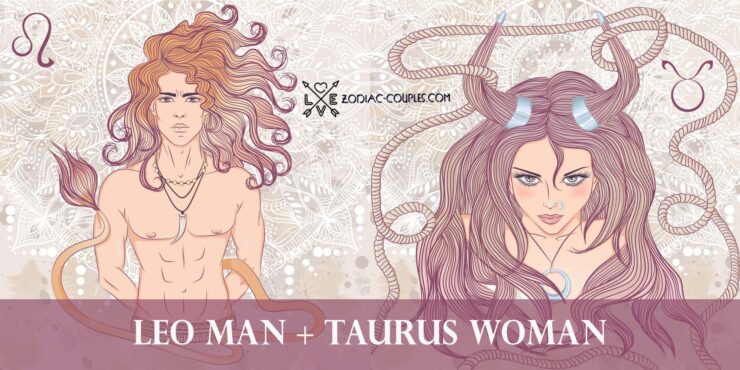 The Leo man and the Taurus woman have a low chance of creating a long and happy union. This is since these zodiac signs have different outlooks on life, and live in different rhythms. The lifestyle of partners is different; therefore, they have few chances to meet. If they fall in love and decide to build a relationship, then both signs will get on each other’s nerves. Partners will always argue about even the most common things.

Initially, both zodiac signs assess the benefits of the relationship for themselves. If there are fewer advantages, then they decide not to waste time. If the couple decides to try to start a family, then success is doubtful. It will be difficult for a woman since Leo man is not used to noticing someone other than himself. He will ignore the feelings, needs, and desires of a lady. But if a man falls deeply in love, he will be able to push his egoism into the background.

The key to a long-lasting relationship between a Leo man and a Taurus woman is mutual respect. If the feelings are strong enough, then the relationship will develop steadily. Still, the union has a lot of work on both of them.

Ana is Taurus, and Ben is Leo. The couple starred together in 2019 in the film Deep Water. It is believed that their romance began after filming, although both have been denied this for a long time. In early 2020, the couple went on joint trips and later began to go out on dates frequently. It was already impossible to doubt the relationship. They spent the entire lockdown together and were the paparazzi’s main target until Ana eventually published photos together on Instagram. In December of the same year, the couple started living together. Their relationship seemed perfect, although, in January 2021, the couple suddenly decided to break up. Their separation was peaceful, and by mutual agreement, the two just decided that they were at different stages of their lives.

Gina is Taurus, and Laurence is Leo. The couple got engaged in 2001 and got married a year later in New York. The partners have been married for 16 years. They have one daughter together, and Gina became Laurence’s two children’s stepmother from his first marriage. In 2017, Torres announced their separation, and two months later, Laurence filed for divorce. At that time, the public already saw her with another man. The partners cited irreconcilable differences as the reason for the divorce, and Fishburne demanded joint custody of the child. The divorce ended in 2018.

Debra is Taurus, and Timothy is Leo. The couple met in 1985 at a Farm Aid benefit concert. They got married a year later. The couple welcomed their first and only child in this marriage in 1987. For unknown reasons, the union ended in divorce in 1990. After some time, being a successful actress and Oscar nominee, Debra decided to take a break in her acting career that lasted for six years. Then she returned to work with renewed vigor and inspiration.