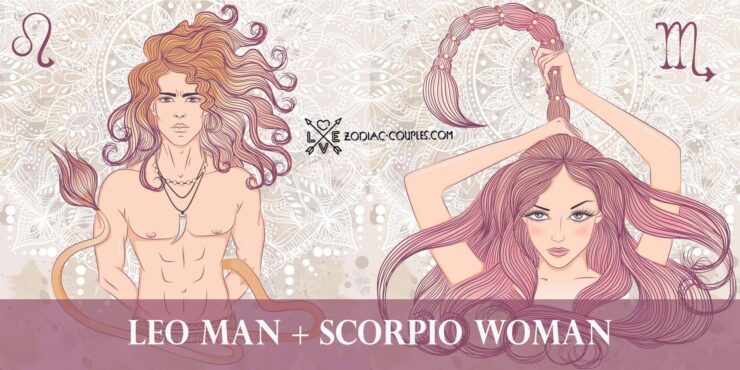 The Leo man and the Scorpio woman have almost perfect compatibility. Both signs are very proud and secretive. A woman is very demanding of her partner and will allow only a worthy one to be with her, and she considers a Leo man just like that. He is fascinated by her mystical depth. Scorpio is silent, mysterious, and quickly makes a man fall in love with her. She admires his mannerisms and ability to behave in society.

Both signs love public recognition, praise, and compliments, despite Scorpio being a couch potato. Partners in a union are wise enough to feel and give each other exactly what they need.

The relationship between a Leo man and a Scorpio woman is very passionate, and it also looks like a well-coordinated mechanism. They work great in pairs, both in business and in the family.

Since the signs are very ambitious and purposeful, they always get what they want. Choosing a partner is difficult for both, but it usually ends in a long relationship.

Bo is Scorpio, and John was Leo. The scandalous couple met in 1973 on a set in Greece, and John fell in love. Bo was only 17 at the time, and he was 30 years older and married. Since the girl had not yet reached the age of consent, the couple lived in Germany until her eighteenth birthday to avoid the states’ law. They later married in 1976 and lived together until John died in 1998. Of course, it was a scandal about the seduction of a minor, but the couple lived in love for over 20 years. He actively helped Bo to move up the career ladder and become a sex symbol of that time.

Arnold is Leo, and Maria is Scorpio. They were introduced to each other in 1977 at a charity tennis tournament. They got married in 1986 and have four children together. Shriver filed for divorce in 2011. The reason for their separation was Arnold’s constant and long infidelity to his wife. The last straw was the fact that one of the housekeeping staff had a 14-year-old son from Arnold.

Kathleen is Scorpio, and Bruce is Leo. The couple tied the knot in April 1994, after 5 years of dating, and have one son together. When they met, Kathleen thought that she would never date the actor again. However, they have been together for more than 30 years. As Quinlan says, the secret of their long and happy marriage is support and a good sense of humor. They both are not self-centered, as many actors and their children are their priorities. She has a stepson also.

John is Leo, and Rebecca is Scorpio. The couple met on backstage at the Victoria’s Secret Fashion Show in 1994. They started dating only a couple of months after their first meeting and tied the knot in 1998. They filed for divorce in 2004, and it was finalized the next year. There was no certain reason for their separation. They remember and describe their marriage only as a time full of love, joy, and having fun. The two just decided to go on different paths.

Jenny is Scorpio, and Donnie is Leo. They met in 2013 on the VH1 talk show she had at the time, and he was her guest. Next year the two tied the knot in a private ceremony. She has a son from a previous marriage. Jenny and Donnie celebrated their sixth anniversary in 2020 and don’t even think of separation.

Jason is Leo, and Lisa is Scorpio. He first met his future wife in the 1980s while watching TV when he was a kid. Their first real meeting took place in 2005 in the jazz club, and their mutual friend introduced the two. It was truly a destiny event since in 2007 they already welcomed their first child together and in 2008 – second child. The pair tied the knot after twelve years of dating in 2017. They are known for their tender relationship and their small actions of love for each other.

In 2022, however, they decided to part ways still maintaining loving relationships.

Bill is Leo, and Hillary is Scorpio. Their first meeting took place in 1971 at the Yale University library. Hillary immediately attracted Bill, and the couple later started dating. In 1972, the pair first worked in politics helping George McGovern with his presidential campaign. A year later, the two got engaged, and in 1975 they got married in an intimate ceremony. In 1976 he began his political career as Attorney General of Arkansas, and in 1992 he became President of the United States.

In 1998, a scandal erupted in which Bill confirmed his extramarital relationship with Monica Lewinsky, but the couple managed to cope with it. In 2001, Hillary began her career as a New York Senator. As for their relationship, the couple overcame all the difficulties in their marriage, supported each other in their careers, and welcomed three grandchildren from their only daughter. Their marriage is over 45 years old, and they are not going to end.

The couple got married in 1995 and filed for divorce in 2006, after eleven years of being together. Their marriage was hidden from the public eye. The two had no children together.

They started dating in 2006 and later got engaged in 2008. The couple has three children together. It has been more than ten years of their engagement, but it seems that they feel comfortable even without marriage and have a big beautiful family.