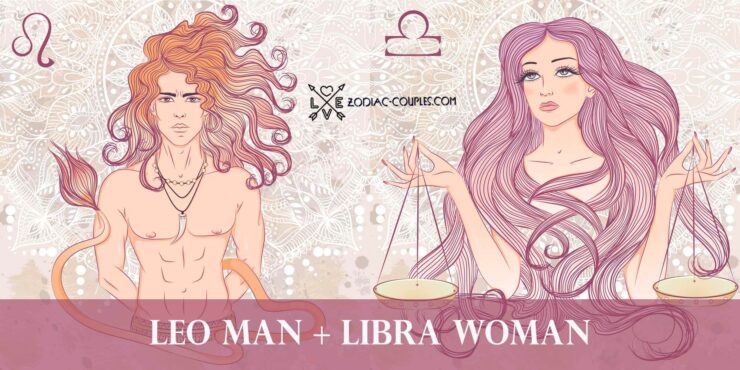 The union of a Leo man and a Libra woman can be described in one word – diversity. These zodiac signs hate boredom in all its forms, so they do their best to make their life brighter. They are two creative personalities between whom there is professional competition. They have every chance of being a long-term and happy couple, provided they learn to compromise.

Feelings between partners can arise from the first meeting. They see themselves in a partner as in the mirror, a person who will understand and support. The Leo man and the Libra woman often find active and extreme hobbies together. Partners skillfully assign roles in relationships and do not oppose them. A man accepts that a woman is bright and sociable and proud of her, and a woman gives a man leadership and allows him to solve problems like a grown-up. However, Libra’s sociability can cause rage and jealousy in Leo; it is important to control this.

Kate is Libra, and Sam is Leo. The couple met in 2001. Their desire to get married was spontaneous, and they tied the knot. The couple had one child in the marriage, and one child was from Kate’s previous one. In Hollywood, the couple was considered one of the strongest and most influential, but they had an ordinary life. The decision to divorce was as spontaneous as the decision to get married. A couple of months after breaking up, they publicly announced their divorce in 2010. The decision was made mutually, and they immediately agreed to the terms of custody. The divorce was finalized in 2011.

Pete is Leo, and Bridgette is Libra. The couple met by chance at the cinema, and Pete immediately liked Bridgette. They started dating, and after nine months, he proposed to her, and sixteen weeks later, the couple got married in 2000 in their backyard. In the marriage, the couple welcomed two children, and Bridgette disappeared from television screens. As it turned out, she wanted to become a housewife long ago, and with the birth of children, the desire only became stronger. She could not leave the children to babysit and was afraid to miss every moment of their growing up. The couple has a very tender relationship, and Pete considers Bridgette to be his main life reward.

Julie is Libra, and Blake was Leo. The couple met 10 years before their marriage. It was a chance meeting on the road. In 1967, they both went through difficult divorces, and after working on Darling Lilli in 1968, feelings flared up between them. The couple got married a year later. Julie had a daughter, and Blake had two children. No one believed that the couple would build a long relationship because he was 13 years older. However, they later adopted two more children from Vietnam and carried their love throughout their lives. Their marriage lasted until Blake died in 2010, and Julie could not recover from the loss for a long time.

Chris is Leo, and Jennifer is Libra. The couple is in a very long-term relationship, the starting point of which is not known. Now they have two children together, who was born in 2008 and 2009. Chris and Jennifer are not married, and this does not bother them because their relationship is strong and happy, and in their opinion, the wedding is needed only to please others. The two devote a lot of time to raising children so that they are friendly. And they also raise future artists.

Barbara is Libra, and Dylan is Leo. They met at a party, after which Dylan wrote her a message, but she ignored it for a long time. When she finally decided to answer, they began to communicate actively. The couple started dating in the summer of 2018 but preferred to keep their privacy. Fans just watched the couple spending time together and how they wished each other a happy birthday on social media. The union started attending events as a couple and moved to New York together in 2019. Since then, Dylan has been regularly attending fashion shows and events where his beloved one participated and he is a supporter of Barbara. The couple is doing well.