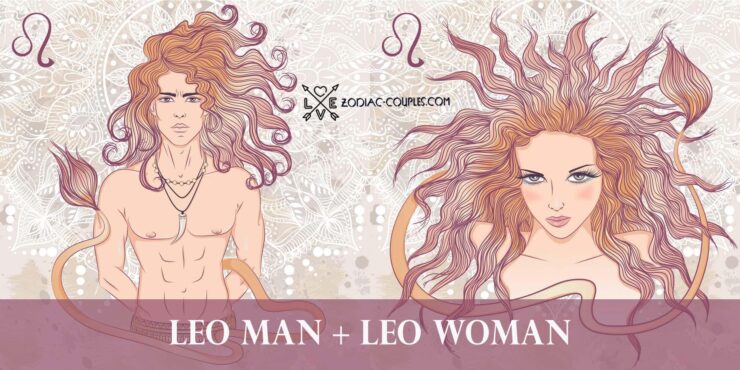 Although it is generally accepted that opposites are attracted, the same Zodiac signs of the Leo man and the Leo woman have pretty good compatibility. At the first meeting, partners are literally mesmerized by each other because it is not so often you can meet a copy of yourself of the opposite sex. The Leo man is very domineering and loves to lead in everything: both in work and relationships. He is very courteous towards women, appreciates stability, loyalty, and honesty. The Leo woman always behaves with dignity, is very sociable, graceful, and loves compliments.

The same signs positively affect the couple’s leisure time, since they have very similar interests and it is always pleasant for them to spend time together. A woman sees a man as an ally, protector, and support.

Relationships can be negatively affected by their general stubbornness. They will quarrel, argue, stand their ground, and wait for the partner to be the first to admit his guilt.

Since the Leo woman and the Leo man are by nature their owners, a couple will often be jealous. Partners need to learn to trust their loved ones to make a calm atmosphere at home, not storm clouds.

Antonio is Leo, and Melanie is Leo. They first met in 1989 at the Academy Awards, and Banderas immediately fell in love with her, even though Griffith was there with her husband. After the divorce from their previous spouses, they got married in 1996 and later welcomed their daughter. The couple filed for divorce in 2014 but stayed in a loving and friendly relationship. It is known that they had some issues in their marriage and didn’t manage to find a solution.

Natasha is Leo, and Darius is also Leo. The couple met in 2004 on the pedestrian crosses. They madly fell in love and started dating, but in 2010 the two separated for 5 months. Their soon reunion was followed by the secret wedding on Valentine’s Day in 2011. That didn’t last long, and in 2013 they filed for divorce, which was finalized in 2018. The pair had no children together.

Jennifer and Alex are both Leo. Their first meeting was when Jennifer visited a baseball game at Shea Stadium in Queens with her husband in 2005, and it seems that they felt the connection from the first handshake. Their reconnection was in 2017 at the restaurant. In March 2019, the couple got engaged.

It seems the couple was ready to shout to the world about their love. Over the years of their relationship, they have been seen together countless times at various ceremonies and events. Each partner has two children from previous marriages, and they were happy to share on social networks how they managed to unite and become one huge and friendly family.

Unfortunately, in May 2021 they cancelled their engagement.

Also, earlier J Lo dated another Leo man – Ben Affleck 💔 – they met on the set of Gigli and got engaged in November 2002, but things went wrong, and in 2004, the two called off their engagement and separated. It was one of the most talked-about couples in Hollywood. After the split, she married a Virgo man.

Madonna is Leo, and Sean is Leo too. The couple met in 1985 on the set of her Material Girl music video. Both had just ended their previous relationships, so both decided to start with friendship. This did not last long, as they soon began dating, and six months later, they were already married. Even though the couple looked incredibly happy, there was infidelity and domestic violence in their marriage. They divorced in 1989.