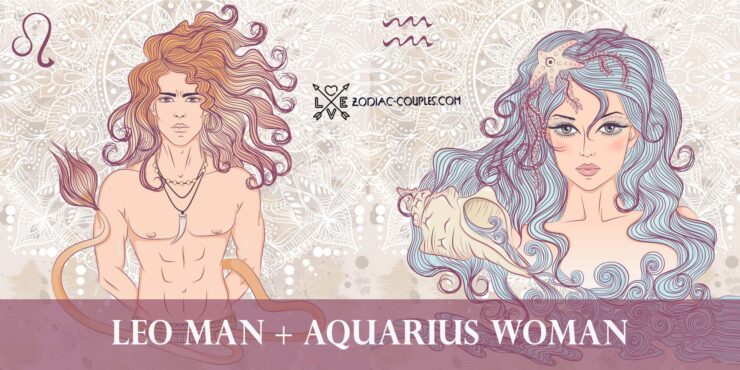 The Leo man and the Aquarius woman have similar characters, temperaments, and outlook on life, but this prevents them from building strong relationships. It is difficult for partners to agree since they are two strong personalities who are constantly fighting for leadership and do not want to give in to their partner. However, initially, their relationship begins very quickly. The Aquarius woman is the first to fall in love because she cannot pass by such a strong and self-confident man. A lady will not be stopped because a man can be married and have a family.

The Aquarius woman tries to impress the Leo man, and she succeeds. At the beginning of the relationship, they are absorbed in love and spend all their time with each other, but later they drift away. A woman does not like restrictions and control so that she can leave the relationship. Their feelings fade as quickly as they light up. Therefore, if they are in a hurry with the marriage, then such couples get divorced.

Jeanne was Aquarius, and Louis was Leo. Louis was married before he met Jeanne, but the marriage ended precisely because the two met. They met during World War II when he was studying piano at a music school. He fell in love with the secretary, and she was mad about his playing a musical instrument. The couple got married in 1943. They had two sons together. The partners lived in a happy marriage for forty years, and the only obstacle in their way that separated them was the death of Louis in 1983. So a chance meeting became the beginning of a lifelong love.

Sam is Leo, and Katharine is Aquarius. The couple met in 1978 while filming the horror film The Legacy. Ross was married to her fourth husband at the time, and after her divorce in 1979, she and Sam began dating. The couple tied the knot in 1984 and had a daughter. Sam turned down a role that became significant for his career, as he was on his honeymoon. However, the wife insisted that he go to audition. She was right. The partners continue to pursue their acting careers, but apart from that, they are working on the marriage. Sam says marriage is hard work and well worth it.

Roman is Leo, and Sharon was Aquarius. They met in the mid-1960s when Sharon wanted to star in his film. Their first dates were strange. He didn’t speak, and then he used strange humor. Despite the not entirely romantic beginning, they still fell in love and got married in 1968. In relationships, Polanski occupied a leading position and kept everything under control, including his wife’s appearance. He repeatedly cheated on her and brought other girls home. Also, when Sharon became pregnant, Roman insisted on an abortion, but she refused. Then he went to London and started an affair there. Their marriage was not destined to last long. A tragedy happened to Sharon. Pregnant Tate and their friends were brutally murdered at her home. The death of his wife influenced the rest of Roman’s life, and he still remembers her.

Peter is Leo, and Cybill is Aquarius. The couple met in 1971 while filming The Last Picture Show. When he was looking for an actress to play in his film, he was married, and it was his wife who noticed the model. During filming, Peter began an affair with Shepherd. Once Peter got divorced, their relationship became official and lasted until 1978. Shepherd said how romantic Bogdanovich was, but their paths went their separate ways.

Justin is Leo, and Jennifer is Aquarius. The couple began dating in 2011, and their relationship developed rapidly. In 2012, Jennifer and Justin got engaged. The partners got married three years later in California. Their relationship seemed perfect, but in 2018, the couple announced their separation. The divorce was peaceful and by mutual agreement, and they maintain warm, friendly relations to this day.

Other Leo and Aquarius couples