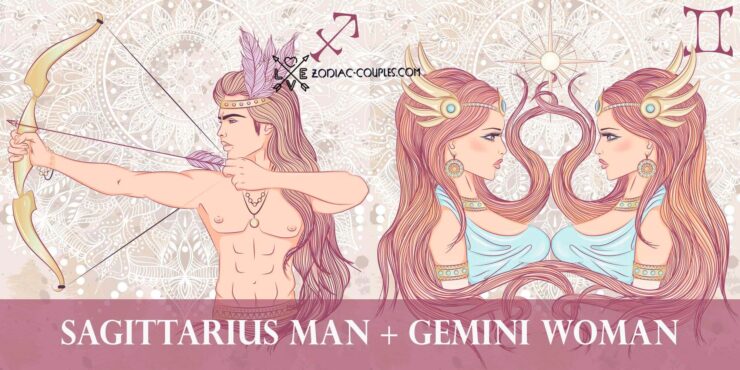 The union of a Sagittarius man and a Gemini woman will be bright, unusual, and memorable. Partners are opposites of each other, but it seems to them that they complement each other perfectly. It appears to these zodiac signs that their differences will push their development and personal growth. It is difficult to predict the outcome of this relationship since the partners are completely unpredictable. The only way to achieve harmony and stability is a compromise and partners’ desire to learn from each other’s experience.

The Sagittarius man and the Gemini woman attract each other from the first acquaintance, and, first of all, this is an intellectual attraction, not a physical one. They always have topics for discussion, and based on this, they develop their relationship. A man is attracted by the lightness of a woman, cheerfulness, activity. A woman sees reliable support in a man. These zodiac signs soberly assess their relationship and the difference in characters, so if they still decide to split up, they do it in a civilized manner and without unnecessary resentment against each other.

Joel is Sagittarius, and Cleo is Gemini. The actor and tattoo artist started dating in 2014. After two years of relationship, Kinnaman announced on The Talk that he and Wattenström were married in a secret ceremony. However, in 2018, the couple decided to divorce. They did not reveal their personal lives, did not discuss it in interviews, and kept everything behind a closed door. However, it is known that the partners remained in good friendly relations and went to build their lives separately.

Brad is Sagittarius, and Angelina is Gemini. The couple met in 2004 while filming the movie Mr. & Mrs. Smith. It was then that they fell in love with each other, and it became a loud scandal since Brad was still married to Jennifer Aniston. In 2005, his divorce began, and Pitt accompanied Angelina during the adoption of the girl from Ethiopia. When the divorce ended in 2006, Angelina was already pregnant with the couple’s first child. In 2012, the couple’s manager confirmed their engagement, and they got married in 2014 in their castle in France, having already six children. Their marriage turned out to be significantly shorter than the relationship, and in 2016 Angelina filed for divorce, demanding joint custody of the children. In 2020, the divorce was not yet completed, but the couple is trying to agree and establish joint parenting.

Josh is Sagittarius, and Ginnifer is Gemini. The couple fell in love on the set of Once Upon a Time, where she played Snow White, and he played the Prince. At the premiere of the film in 2011, there were already rumors that they were dating, and by the spring of 2012, they were already living together. A year later, the couple got engaged, and in 2014 they got married and greeted the baby. In total, the couple has two children. The partners met in a fairy tale, and their life together is built on the same principle. They are incredibly happy, raise children and miss working together.

Marilyn was Gemini, and Joe was Sagittarius. In 1952, Joe asked a friend to arrange a date with Marilyn, which was successful. He was very courteous and respectful of her. According to Monroe, they were united by a desire for family, children, and stability. The relationship without marriage could negatively affect their careers, and in 1954 the couple got married. The decision was spontaneous, and they squeezed the wedding into their busy schedules. They spent their honeymoon on a working trip. Everyone initially doubted the strength of their marriage. After the trip, Monroe began to be annoyed by his jealousy and the fact that he was involved in her career and job negotiations. Nine months after the wedding, she announced her divorce, citing moral cruelty on his part. However, he begged for forgiveness, but the divorce took place. They were later friends, and he supported her in her fight against depression. After her death, he took her body and organized a funeral. He never married again and arranged for flowers to be delivered three times a week to her crypt for 20 years.