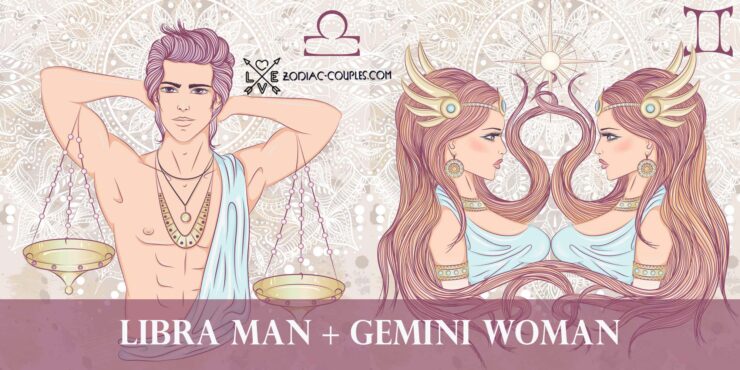 The Libra man and the Gemini woman will have to make an effort to build a relationship since this mechanism itself will not work. Conflicts will arise between partners based on misunderstandings. At the beginning of the relationship, they will have to study each other and accept differences that will initially be frustrating but will later become what holds them together.

Most of the fights will be at the beginning of the relationship. A Gemini man imagines a woman somewhat differently, and he needs time to discern her loyalty and sincerity. On the contrary, a Libra woman falls in love from the first meeting. If a man does not end the relationship ahead of schedule, then a great future awaits the partners. They will discover more and more facets in each other. They will always find topics for conversation and finally decide to get married.

Marriage problems will arise when the period of passion has passed, and partners cannot find a new approach to each other. They are in no hurry to part with the chosen one since this is still a husband and wife. But soon, they begin to live as neighbors. To avoid problems and maintain relationships, partners need to remember about romance and surprises for their spouses. Such gestures of caring will not let the feelings fade away.

Missy is Gemini, and Zachary is Libra. The couple got married in June 2014 after about ten years of relationship. Since Levi is private about his personal life, their meeting’s exact date and the beginning of the relationship are unknown. However, after half a year, Peregrym filed for divorce, citing irreconcilable differences. The partners’ divorce was peaceful and not long since she only wanted to share their shared assets. The reason for such a short marriage was that Levi was not ready for such big commitment, duties, and responsibilities.

Chelsea is Gemini, and Scott is Libra. The couple first met on the set of Passion to Kill in 1993. Then Scott was still married, but by his divorce in 1995, Chelsea had already had their first child. After the birth of their second child, the partners got married in 1999. The first marriage that fell apart taught Scott an invaluable lesson. Then he devoted all his time to his career, because of which he did not see how his children grew up, and the relationship suffered. In his second marriage, he worked a lot with his wife Chelsea, and when this was possible, he limited his schedule to spend evenings at home with his family. This method worked, and the partners are still happily married and have happy children.

Coleman is Libra, and Anne is Gemini. The partners got married in 2001, a year after they started dating, and in 2002 they had a son together. Their marriage was not destined to last long, and in 2007 Laffoon filed for divorce, citing irreconcilable differences. The divorce process took almost two years and was completed in 2009. Between them, there was a fierce struggle for custody and property. Although they have joint custody, the son lives with his father. Heche had to pay a large one-time payment to her ex-husband, as well as pay child support. They also wholly divided the property. In 2017, Heche went to court to revise the terms of her alimony, as her ex-husband was asking for huge sums. By then, her income had dropped, and Laffoon was getting married.

Judy was Gemini, and Mickey was Libra. Deans claimed that they have met in 1966 when she was still married, but her daughter claims that it happened in 1967 after the divorce. Judy was addicted to psychotropic substances, and Deans, as an acquaintance, helped her get the medicine. The daughter thought that Mickey would help her mother cope with the addiction, but he, in turn, gave her access to everything that she wanted to try. The couple got married in the spring of 1969, and three months later, Judy died of an accidental overdose. He never married again after her.

Bruno is Libra, and Jessica is Gemini. They met during a dinner at a restaurant in New York in 2011, and for both, it became love at first sight. They soon began dating. The first year of the relationship was not easy since they were at a distance. Since then, these two birds in love have been inseparable. She inspires him in creativity, and he supports her. Both keep the relationship private, occasionally mentioning in interviews that they are doing well. Although they are not married and are not planning on, their relationship grows stronger every year.

Merilyn was Gemini, and Arthur was Libra. The couple first met in 1950. Arthur’s distant behavior impressed Monroe, and she took it as respect for her. He was married at the time. In 1951, she accompanied him to the airport, hoping that he would divorce his wife and return to her. They exchanged addresses for correspondence, and she put his photo under the pillow. But he stayed in New York, and their next meeting took place only four years later.

In 1955 she moved to New York to study acting and to bond with Miller. He was still married at that time, and she became a celebrity, so it became difficult to keep their romance a secret. Arthur did not want to get a divorce, but he loved Monroe. They got married in 1956. Monroe was inspired by love and delighted with the marriage but found her husband’s notes to say how he was disappointed in her. Marilyn was depressed. This was not the last difficulty in their marriage. The conflicts escalated, she had three miscarriages. In 1960, they announced their separation, and in 1961, Monroe went to Mexico for a divorce. Miller did not attend her funeral a year later, saying, “She won’t be there.”