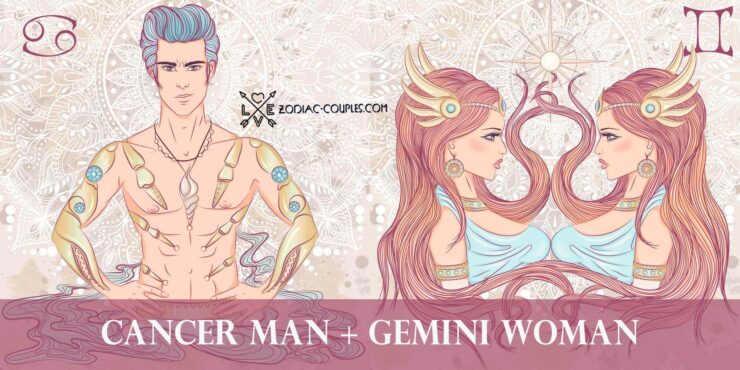 The union of a Cancer man and a Gemini woman has a high chance of building a long and healthy relationship. Still, in reality, everything will depend only on the partners’ feelings, desires, and priorities. These Zodiac signs understand from the first meeting that they like to spend time together, comfortably and interestingly. It is for this reason that relationships quickly develop into love relationships. Thanks to each zodiac sign’s peculiarities, the Gemini woman will fill the connection with interesting conversations and pastimes, and the Cancer man will fill them with tenderness and love.

Problems in a couple can arise since the values ​​of partners may differ. A woman may want freedom and easy relationships, and a man may wish for a strong family. Of the two, Cancer is more inclined to show feelings so that he may feel a lack of attention from a woman. He wants to hear words of love addressed to him, but a woman does not like excessive tenderness and does that with difficulty. Most often, these zodiac signs manage to build relationships, but some couples still break up.

Tom is Cancer, and Nicole is Gemini. The couple met while filming the 1990 movie Days of Thunder. Feelings swirled the couple, and at the end of the year, they got married. The couple adopted two children in marriage. In 1999, the couple also co-starred in the film Eyes Wide Shut, which Nicole has fond memories of. Their relationship lasted 11 years until Tom filed for divorce from Nicole in 2001. They did not yet know that she was pregnant at the time, but the pregnancy was ectopic. Years later, Nicole remembers their marriage as happy, but they don’t keep in touch after the divorce.

Edward VIII was Cancer, and Wallis was Gemini. They first met in 1931 at a party hosted by his then mistress. Wallis was married twice, and at the time of their acquaintance, she still had a husband. In 1936 Edward VIII was crowned, and at this time, the government already knew that he had a relationship with a married actress. In October, there was a trial of Simpson and her then-husband, in which documents were presented about his infidelity, which was in fact rigged. In December, Edward VIII abdicates the throne, as he does not want to rule without his beloved woman, and the couple got married in 1937. They lived together until their death. He died of cancer in 1972, and she died in 1986.

Judy was Gemini, and Mark was Cancer. The couple met when Mark produced two of her shows in 1964 at the London Palladium. When they began a passionate romance, Judy was still married. However, after her divorce, the couple quickly married in Las Vegas in 1965. Their courtship and marriage ended as abruptly and rapidly as they began. Five months after the formal wedding, the partners decided to separate, and the divorce officially ended in 1967 after Judy accused Mark of abuse.

Erich was Cancer, and Paulette was Gemini. Although the couple had seen each other earlier, their romance began in 1951. She was already over 40, and he was over 50. She was once a sought-after actress, and he was a rich writer. Both had an active social life. The couple got married in 1958. In 1963, Remarque suffered a stroke, after which he weakened and could no longer entertain Goddard. They lived together until Remarque died in 1970. Goddard herself had an operation to remove her breasts due to breast cancer in 1975, which had a detrimental effect on her self-esteem. She became more and more closed in herself and became addicted to alcohol. So she lived until 1990.