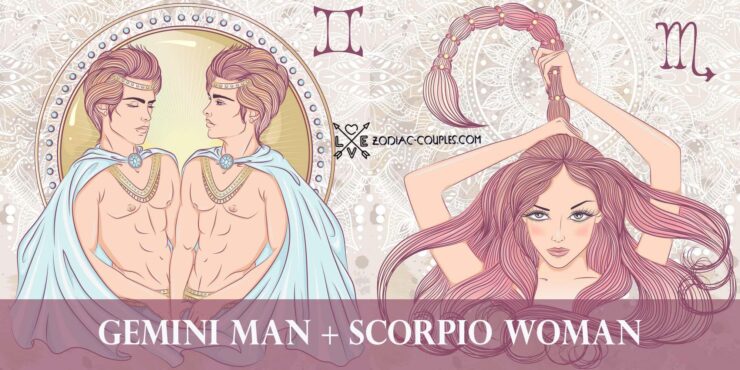 The Gemini man and the Scorpio woman have quite a weak compatibility in general. Signs differ greatly in their characters, but both are strong personalities who always want to lead and win in any dispute and disagreement. What is very important in a relationship, particularly concessions and compromises, can be too difficult for partners.

The personal life of these signs cannot be called boring. They are either full of love and passion or loudly sort out their relationship with a scandal. Scorpio woman loves drama and depth of feelings. Gemini man, on the contrary, is very superficial. A woman will not be bored with a partner, as she appreciates a sense of humor, and this is its main advantage.

This couple’s success secret is in the ability to negotiate and close their eyes to the partner’s faults. An essential bond for Scorpio and Gemini is a common goal. Partners will be burning with a common profession or business, and against this background, they will feel a strong converging.

Grace was Scorpio, and Prince Rainier was Gemini. The couple met in 1955 during loud events in Cannes, and their meeting was well planned. Grace was engaged at that time with her previous partner. The prince was mad about Grace, but she, in turn, did not attach much importance to his signs of attention. He had to fight for her heart notably, and after a large number of letters and expensive gifts, she still capitulated to him. Although the two got married in 1956, it was a huge epic two-days long wedding. Grace had to give up her American citizenship and her fast-growing career as an actress. She no longer appeared in Hollywood and films.

She died first. In 1982, while driving, she had a heart attack and lost control. She died from her injuries the next night; Rainier turned off the life support equipment. The couple had three children.

Lisa is Scorpio, and Lenny is Gemini. The couple met in the mid-80s at a New Edition concert. At that time, she already had a successful career, and he was an unknown musician. The two started their relationship as friends, but in 1987 tied the knot and in 1988 already welcomed their daughter.

Their happiness didn’t last long, and in 1991 they separated. The divorce was finalized in 1993. It seems that it wasn’t just the right time for the family for both partners; they tried to cope with their own struggles. After a decades after divorce, the couple maintains their relationship as friends.

Rosemarie is Scorpio, and Ron is Gemini. They met on the Standoff series set in 2006, and three years later, tied the knot in 2009. The couple has adopted a daughter in 2013, and the second daughter was adopted in 2016. Rosemarie says the girls quickly hit it off and get along well with each other.

The couple does not like to divulge the details of their personal life and occasionally share some aspects with the press. However, there was no news of a divorce, and there is not any, they live happily as their family of four.

Winona is Scorpio, and Johnny is Gemini. Depp saw Ryder for the first time at the premiere of Great Balls of Fire! in 1989 and was attracted by her beauty. However, fate brought the couple together again in 1990 while working on the film Edward Scissorhands. The partners’ age difference was 9 years since when they started dating, she was only 17 years old, and he was 26. It was a crazy love, Depp in every interview talked about how lucky he was. They were engaged, but in 1993 they surprised the audience with their breakup announcement.

Ol Parker is Gemini, and Thandie is Scorpio. The couple met on In Your Dreams, where Thandie starred, and Ol created a screenplay. For him, it was love at first sight since he immediately felt the connection when he saw her on the set. They tied the knot in 1998. The pair has two children together and live their best life.

Svante is Gemini, and Malena is Scorpio. They got married in 2004. She is an opera singer; he is an actor. The couple has two children, including Greta Thunberg. It’s worth mentioning that the parents are now more famous thanks to their young daughter, a climate activist. Parents are her managers and provide unconditional support. This shows the unity of their family.