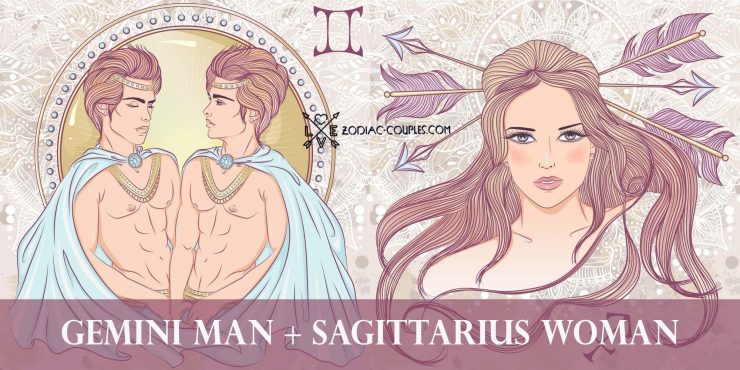 The relationship of a Gemini with a Sagittarius woman brings joy to both partners. They are distinguished by purposefulness and communication skills. Lovers manage to win each other over easily. Their tandem is based on love. Otherwise, one could forget about its duration. Such people are young throughout their lives. Gemini and Sagittarius often have the same interests and hobbies, so they always have something to discuss.

Almost always, the union of Gemini and Sagittarius turns out to be harmonious. When such people fail to build a romantic partnership, they become real companions. Their friendship is fascinating and diverse.

Both the Gemini man and the Sagittarius woman are characterized by pride and confidence in their capabilities. They seek pleasure, which sometimes negatively affects the relationship. Lovers are often reflective. Both love to exaggerate, which is why they misinterpret this or that situation.

Christina is Sagittarius and Jordan is Gemini. She met him when traveling to record an album in 2002. He moved to L.A. for her and proposed three years later. In 2005 they married.

They started as friends and Jordan provided her with the support she needed. They have a son born in 2008. But in 2010 they separated and divorced. She said that they just grew apart wanting different things in life.

Today the keep coparenting and stay in good relationship.

Jennifer is Sagittarius, and Paul is Gemini. They starred in a film together in 2001, but he liked Jennifer even earlier – she was his teenage movie crush. While working together, they both were seeing someone else, and only later on 9/11, Paul was so worried that she called her and proposed right away.

In 2003 they married. The couple has two kids together, and Jennifer’s son from a previous partner, and stays away from the limelight.

Chris is Gemini, and Katherine is Sagittarius. Their meet-up was set up by her mother because she had common friends with Chris, so they started dating in 2018. In 2019 they engaged and later married. In 2020 the couple welcomed their daughter.

Both Chris and Katherine are both spiritually-minded and attend church, they are committed to family values, and obviously it matters for Kath’s big family too.

But before, Chris was married to Anna Faris, who is also Sagittarius. 💔 They met on a movie set in 2007, and she was his love at first sight but started dating only after Anna broke up with her husband. In 2009 they married and later welcomed a son.

Unfortunately, being big-time celebrities affected their private lives – in 2017, they separated but stated that they remain close friends and co-parent a son.