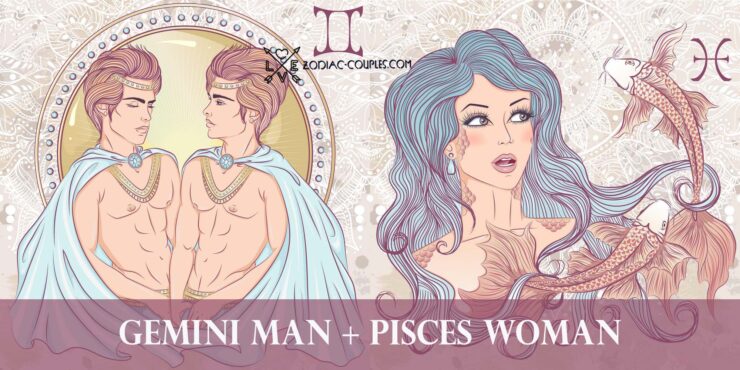 The union of the Gemini man and the Pisces woman will not be easy. Partners are challenging to negotiate and rarely compromise. Their fickleness and ambivalent nature characterize both zodiac signs. Their decisions can be contradictory, and they do not like to make concessions. For partners to build strong relationships, first of all, they need to learn to think not about themselves, but the partner, since both are used to only receiving attention but rarely giving.

These zodiac signs do not fall in love with each other right away. It takes time for a spark to appear between them. The Pisces woman is at first secretive and silent, which immediately intrigues the Gemini man and prompts him to conquer her. The woman looks closely at her partner for a long time and does not trust him, which allows the Gemini man to show his romantic skills. Ultimately, the woman will give in.

At the beginning of the relationship, their union will be harmonious. A woman accepts a man with all his shortcomings; he is her authority and protection. For a man, he mustn’t be criticized. A marriage between two zodiac signs can be healthy and long but provided that Gemini is already emotionally mature enough. Otherwise, he will not have enough freedom and constant meetings with friends.

Stellan is Gemini, and Megan is Pisces. The couple met in 2008 after Stellan’s divorce from his wife. They dated for a year and got married in 2009 when Meghan was already pregnant with their first child together. In total, the couple has two children, and Stellan has six children from a previous marriage. The 25-year difference did not prevent the partners from dating, but it seems that it was only beneficial. The union has no signs of divorce or problems, and they are happy to build a family together.

Benjamin is Gemini, and Kaya is Pisces. The couple met in 2014 on the set of The King’s Daughter, which wasn’t released. Initially, they only had friendships, but after finishing work on the film, they realized there was chemistry between them. The relationship began to develop rapidly, and nine months after their first meeting, Benjamin proposed to Kaya. A year later, they got married. The couple greeted their son together, whose name they continue to keep secret. With all their might, partners try to leave their personal and family life behind closed doors and not devote anyone to details, and they succeed. Occasionally, they share cute photos on Instagram. In 2022 they welcomed another child.

Aaron is Gemini, and Sam is Pisces. The meeting of partners took place in 2008 at the casting for the Nowhere Boy film. At this time, he was 19 years old, and she was 42. The unusual age difference did not bother them, and in 2009 Aaron proposed to Sam. They got married three years later, in June 2012. They have two children together in marriage, and Sam also has two children from her previous marriage. The secret to their long marriage is that they keep their professional and personal lives separate. Partners prefer to hide their family affairs and not share news on social networks and the press. They also do not have long partings, and the maximum they have reached is a few days separately.

Boris is Gemini and Carrie is Pisces. They met at work as both are members of Conservative Party, but after Boris’ then-wife kicked him out in 2018 he started seeing Carrie. In 2020 couple announced their engagement and that they were expecting a baby. By 2022 they have two kids and mutual support and love.