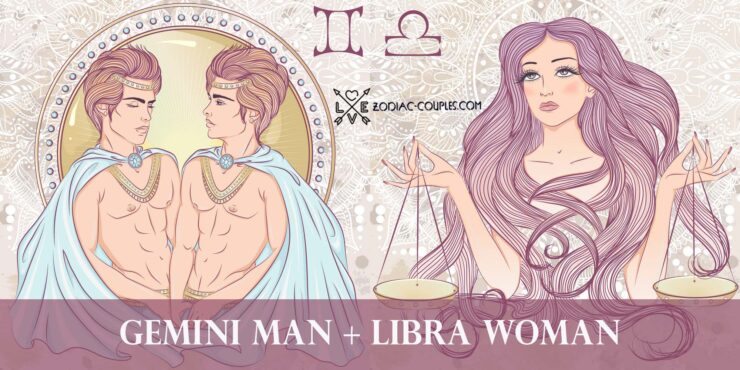 The union of a Gemini man and a Libra woman will be easy and pleasant. However, they may feel a lack of stability and reliability. The man may not notice this, but the woman will be worried. The meeting of these zodiac signs always happens randomly and at some event. If the partners are interested in each other, then the relationship will develop rapidly. Neither Gemini nor Libra likes to wait long.

The duration of the relationship directly depends on the efforts of the Libra woman. A Gemini man is very windy and fickle by nature, so a woman always needs to keep him in good shape and interested. On the one hand, she needs to keep everything under control, and on the other hand, if a man feels intense pressure, he will begin to move away. The Libra woman needs to show all her wisdom. A Gemini needs to be a leader in a relationship. Knowing how to manipulate his mood in the right direction will provide a long and stable connection.

Cillian is Gemini, and Yvonne is Libra. They met in 1996, and it turned their lives upside down. Although they were young and it seemed to them that the relationship was not for long, in 2004 the couple got married and is raising two children. Murphy said that he made relationships and family the center of his attention and never regretted it. In 2016, the family moved from London back to Ireland because they wanted to be closer to their grandparents. The children quickly adjusted themselves, and now everyone is quite happy.

Paul is Gemini, and Linda was Libra. The couple first met in 1967 at the club. Then their meeting led nowhere. Four days later, they met again at a party. She was a photographer and, having completed her work, returned to New York. Their paths crossed a year later in New York, after which he invited her to London. They had a great time there, and Paul had a spark.

The couple got married in 1969. Linda had a daughter from a previous marriage, and with Paul, they had three more children. He admired her calmness and was incredibly comfortable together. The partners did not spend more than a week apart in their entire marriage. In 1998, Linda died of breast cancer, and Paul mourned for his beloved for another year.

Kim is Libra, and Kanye is Gemini. The couple met in 2003 when Kim was still married. The two remained friends then, but Kanye was mesmerized by Kim’s beauty from the first meeting. Their friendship lasted for many years, but he continued to show her his interest. So in 2008, Kanye invited her to his show, and in 2009 he wrote lines about her in a song. When Kim got married again in 2011, Kanye tried to dissuade her but to no avail, and the next year he confessed his love for her in his song.

They started dating that year, and at the end of the year, the couple was expecting their first child. After his daughter’s birth, West rented the stadium to make a grandiose marriage proposal to Kim, and the couple got married a year later. In marriage, they had four children, two of whom were born via surrogate. It was difficult for them, as West was diagnosed with bipolar disorder, which affected the entire family. In 2021, the couple announced that they were planning a divorce for the sake of peace for children and family.

Hilary is Libra, and Matthew is Gemini. The two met in 2015 while working on the album in the studio, and chemistry immediately arose between them. It is unknown when they started dating, but in 2017, they first appeared in public as a couple. That year the union parted for several months but later renewed their romance with new energy. They had their first child in 2018, and Duff has a child from a previous marriage. In the next year, Matthew made a marriage proposal, and they tied the knot by the end of the year. Now the couple is doing well, and they are expecting their third child.

Clint is Gemini, and Maggie is Libra. The couple met in 1953 on a blind date. They immediately loved each other and started dating. By the end of this year, the partners got married. The couple had two children. They divorced in 1984, as Meggie could no longer tolerate Eastwood’s constant infidelity, affairs, and illegitimate children. But this story did not teach him anything, and in the same mode, he lived all his life.

Blake is Gemini, and Gwen is Libra. Their story began when in 2014, Gwen became one of the judges in the Voice TV show. By 2015, both partners broke off their previous relationship, and it became officially known that they had a courtship. In 2020, the couple got engaged. The whole world is watching their mutual appearances on television and social networks. They literally sing each other’s odes. The partners entirely agreed on humor and their love for music, translating into many together written songs.

Other Gemini and Libra celebrity couples