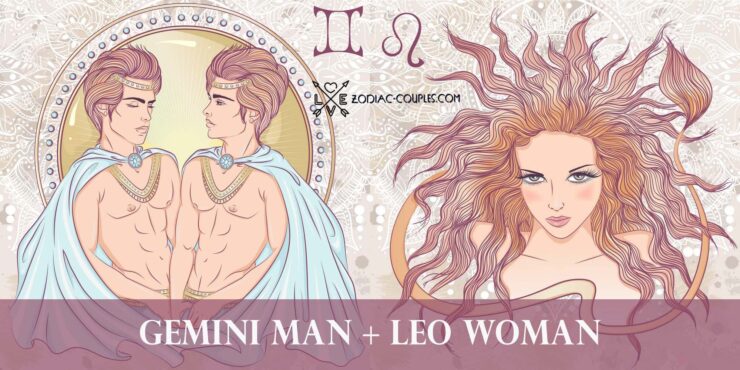 The union of a Gemini man and a Leo woman has every chance of a long relationship. Signs and their opposites can complement each other perfectly. In these relationships, they will find everything they need; they will easily achieve their goals thanks to common efforts. Both signs hate boredom and stability, so their relationship can be bright, interesting, dynamic.

But at the beginning of a relationship, Leo woman needs to humble her pride and restrain jealousy, and Gemini man – finally, to grow up and be ready to reconsider life values and priorities. In their union there are many advantages for which it is worth fighting with yourself and external obstacles.

There can be many conflicts in their relationship, getting used to one another can be difficult and painful. The confrontation between two strong different personalities subsides in a year or two after the meeting. Leo either manages to pacify Gemini’s tempestuous disposition, or they part ways.

Another secret of a successful relationship of these signs is that they both know and value the partner’s personal space and give the necessary freedom. When one sign cools down, the other kindles a fire in their relationship, so they can always feel good in this union.

Jacqueline was Leo, and John was Gemini. The couple met at a dinner party in 1952 and were married in 1953. In 1960, Kennedy ran for president, and the family moved to the White House. The presidential couple has become one of the most beloved and iconic in history.

Their marriage was not perfect. It is believed that Kennedy had several affairs with which Jacqueline dealt.

Kennedy was assassinated in 1963 while riding in a motorcade. A tragic love story recorded in history. The couple had two children.

After JFK passed, Jackie was married to her old friend Aristotle Onassis, but her last years she spent with a Virgo man.

Mamie is Leo, and Benjamin is Gemini. The couple met in 2008 while performing on Broadway. In 2009 they got engaged and, two years later, in 2011, tied the knot. Unfortunately, in 2013 Mamie and Benjamin split up. The couple had no children.

Debra is Leo, and Daniel is Gemini. They met in 1990 when both were students at New York University. After ten years of dating, the couple tied the knot in 2000. The first and only child was born in 2004. The eleven-year long marriage was announced to be ended in 2011, and in 2016, it was finalized.

Lori is Leo, and Mossimo is Gemini. The couple met in 1995 when Lori was still married. They were introduced to each other at a restaurant in Los Angeles. In 1996, she divorced her husband, although it is not fully known what caused their separation and whether Mossimo influenced this decision. The two dated for a while before getting married in 1997. The union welcomed their two daughters. The secret to their long marriage is that they have always treated each other with patience and respect and solved problems rather than running away from them. In 2019, there was a scandal that tested their relationship – after they were trying to bribe college to enroll their children there were trials, and they were sentenced to several months in prison and hours of community service for fraud.

Other Leo and Gemini celebrity couples