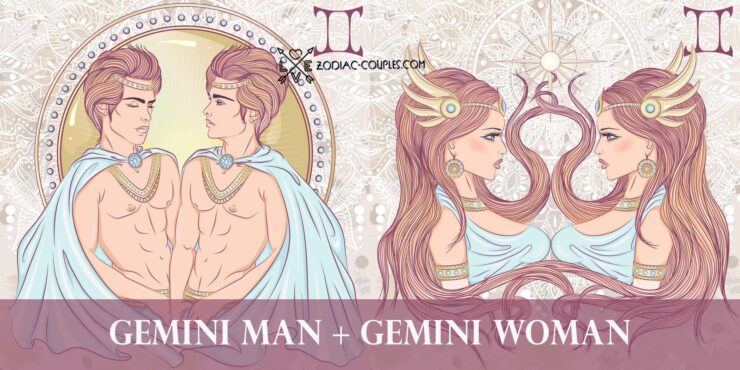 The Gemini man and the Gemini woman are two intelligent, curious, and very active people. If other zodiac signs may find it difficult to get along with Gemini, these two have bingo. The partners are comfortable together; they understand each other and have common interests. Curiously, friendly relations prevail in their relationship, as both get tired of the constant manifestation of love and passion.

When a Gemini becomes a couple, their life is not confined to the partner. They are all the same open to communication, active, and travel a lot. They are not jealous. A woman does not require a man to be with her constantly and to give up friends and hobbies but sincerely supports his interests. But she does not miss him, leads an active lifestyle, and is constantly engaged in something new.

A couple’s problems can arise from boredom. These zodiac signs hate routine in all its forms. If they do not find time for rest, personal space, hobbies, and meetings with friends, then in a couple, conflicts begin on both sides. Interestingly, partners may engage in inappropriate things to distract themselves. They become frivolous; they can cheat on their partner. This is their way of protesting against something that doesn’t suit them.

Natalie is Gemini, and Benjamin is Gemini too. The two met on the set of Black Swan and started dating in 2009. They got engaged in 2010 and tied the knot two years later in 2012. The couple has two children together. The couple is incredibly grateful for the opportunity to work and walk the path of life together. Most of all, they are proud of each other, not the Oscars and Golden Globes.

Erica is Gemini, and Peter is also Gemini. The couple tied the knot in 2005. They welcomed two children: their daughter born in 2011, and the second child born in 2017. The two try their best to keep their personal life under wraps, although the union doesn’t hide their feelings at social events, posing together and kissing. There is no doubt in the seriousness of their feelings. Peter is a proud father and husband, and the two are the best support for each other.

Heather is Gemini, and Nick is also Gemini. The couple met on the set of John Q in 2002. Their relationship started on the set and developed rapidly. The duo tied the knot and has one daughter together. Although Nick filed for divorce and a real custody war broke out between them.

She did not answer calls and did not appear in court, demanding 100% custody, and later Nick accused Heather of kidnapping their daughter. She also accused him of threatening her family in response. As a result, Heather was arrested, and her daughter was found and returned to her father.

Judy was Gemini, and David was Gemini. The couple met when David was arranging her recordings. Initially, their relationship was exclusively business-related, but the two began to communicate more often and closer after his divorce.

They got married in 1941. It was a scandalous marriage at the time, as he was 12 years older. Judy’s family was opposed and worried about her reputation, but love played its part. They divorced in 1944. A passion for music united them, but the personalities were opposite. The moment came when she wanted to become a mother and even became pregnant, but she was advised to have an abortion.