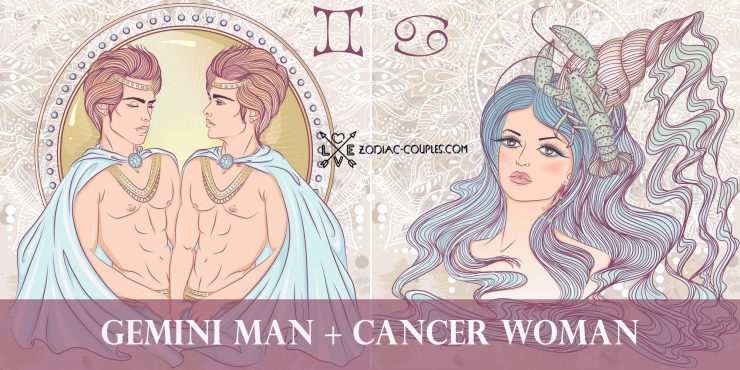 An emotional and feminine Cancer woman immediately attracts the attention of a Gemini man who is famous for his charm, versatile interests, and weakness for the females.

However, compatibility in love between a Gemini man and a Cancer woman is not always cloudless and ideal. The characters of these signs vary greatly. Their union is based either on great love or on the benefits that each receives from another partner. In the first case, the Cancer and Gemini couples can organize their own little world for two; in the second, they live in parallel with each other, without intersecting anywhere except in everyday life.

From the outside, it is possible to determine whether a Cancer and Gemini couple is prefect by only one sign – these people are happy and contented with life because everything else can be very different from couple to couple.

It can be challenging for Gemini man to deal with Cancer’s whims and tacit resentments, they either cannot understand what happened, or they do not notice the problem at all. In this case, the Cancer woman is trying to convey the issue to Gemini, but she speaks in her own language – the language of emotions, and, in the eyes of Gemini, begins to be erratic and hysterical even more.

When a partner becomes bored next to a Cancer woman, he may unexpectedly pack up his things and go in search of a more exciting and temperamental person.

Mark is Gemini, and Rhea is Cancer. They met in 2001 and started dating right away. They have four kids, but got officially married only in 2009 – they never hurried to do it, because both wanted to make sure it will be once and forever.

The couple values family time and is committed to it; they even homeschool their kids. But at the same time, they never forget to find some time just for two of them. Also, it was Rhea who restored Mark’s belief in love – only when he met her, he was ready to be in a long-term relationship.

Michael is Gemini and Tracy is Cancer. They starred in sitcom together in 1987, but it was later in 1988 when they relationship turned into romatic one. In 1988 they got married.

They survived hard times when Michael was diagnosed with Parkinson’s disease and started drinking because of depression. Today they have four kids and pretty happy together.

Clint is Gemini, Dina is Cancer. She interviewed him in 1993, and that’s how they met. In 1996 they married. They have a daughter. Couple’s friends say that it was a close and loving partnership.

But in 2012, Dina made a reality show about their family, and Clint was not happy about it. Their marriage fell apart, and Dina started leaning on her high-school friend, which wife reached out to Clint. So when Dina found out, it was a shock for her. Their divorce was finalized in 2014 and it seems that it was painful for both of them.

Other celebrity Cancer and Gemini couples

Stellan Skarsgård (Gemini) and My Skarsgård (Cancer) 💔 – they have met in 1974 and tied the wedding knot in 1975. They have six children. But in 2006, Stellan filed for divorce. Apparently, the problem was in her alcoholism that developed after My found out about cancer she had.

Cyndi Lauper (Cancer) and David Thornton (Gemini) ❤ – they met in 1991 on the movie set after Cyndi broke up with her manager/boyfriend. They got along and later that got married. Like any other couple, they certainly had issues and spent the time to know each other, but today they are still not just a married couple but best friends. They also have a son.