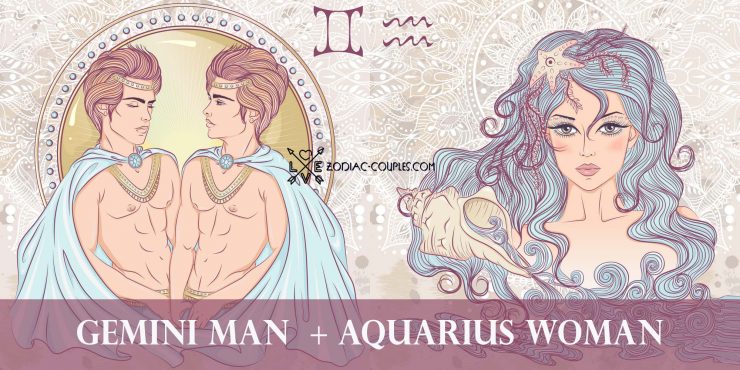 A Gemini man and an Aquarius woman are likely to develop a close relationship. A romance between those Air signs can develop very quickly. They share common hobbies and interests, and they can easily communicate on almost any topic. Relationships between them can become very bright, rich in pleasant emotions and impressions. They get to know each other and get used to their partner smoothly. The union of this couple can be relaxed and easy.

There are certain disadvantages to the Aquarius-Gemini union. Even though partners are good at dialogue and are usually sincere with each other, it can be difficult for them to reach a compromise. Both are strong personalities, and therefore do not want to give in to their partner.

The Gemini man does not appreciate the loyalty and stability of the Aquarius woman. He certainly does not mind a long-term relationship, but without them, he is even better. He is drawn to everything new and unknown. There were times when the Gemini broke off an established relationship, simply because they came across some more interesting and intriguing option. And although the sociability of an Aquarius girl sometimes leads to flirting with others, she will not go any further. And she will require to comply with these boundaries from her partner. The Gemini man can only be faithful because of the merits of his couple.

Vanessa is Aquarius and Tony was Gemini. He saw her in the play and was stroke with her beauty and acting, sure he went backstage to meet her. Two days later he surprised her with bold escapade and they started an affair. It was passionate romance and they got married in 1962. She gave birth to two girls and he was very demanded in his career. That caused them to grow distant. At the same time he was having affairs with men and later the other woman caught his attention. They divorced in 1966 but decided to remain friends.

Bridget is Aquarius and Danny is Gemini. They met in 1997 while working on the same film and got married in 2003, they have a son. When they started a family, Bridget don’t work much – she dedicated herself to raising a son and Danny’s kids. Currently, they live away from the spotlight.

Mary is Aquarius and Malcolm is Gemini. They have met in 1978 while filming a movie and got married in 1980. They have two kids together. In 1990 the couple got divorced, but they keep being friends.

Gemma is Aquarius and Rory is Gemini. They both appear in a play in 2017 and started dating since. In 2019 they got married despite the fact, that she seemed to lost faith in a marriage after previous divorce. She also says, that Rory is supportive partner and he believes in her.