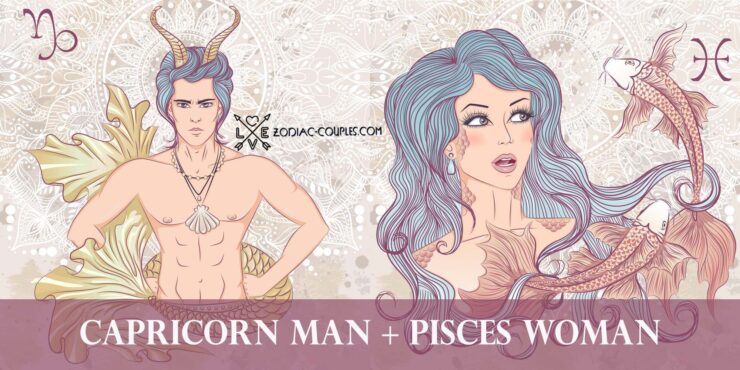 The union of a Capricorn man and a Pisces woman is quite common. It is not surprising because the zodiac signs easily find a common language and have similar views on life and goals. Capricorn is distinguished by its determination, loyalty, and thoughtfulness. Spontaneous decisions are not for Capricorn. A man thinks about situations from all angles, so he acts decisively if he chooses a worthy woman. The Pisces woman is a subtle nature; she feels the mood of people and is very friendly. She manages to find a common language even with the most withdrawn and distrustful people. A woman completely surrenders to the relationship and partner, forgetting about her own needs. Partners quickly become involved in a relationship, and their connection becomes like a marriage, even if they just started dating. They create a shared budget, share responsibilities, and make plans.

These zodiac signs are revealed from the best sides in this union. She does not manipulate and does not try to dominate a man, thanks to which he begins to trust her. A man is not shy about expressing his feelings. Although the views on the life of partners are similar, their interests are entirely different. Therefore, they do not spend time together just like that. Their leisure time is carefully planned to meet the wishes of both partners. Despite the right prospects for the relationship of the zodiac signs, if the partners met at the wrong time and no connection was established between them, they quickly part so as not to waste each other’s time.

Kevin is Capricorn, and Christine is Pisces. Once the partners met while playing golf, this meeting went unnoticed, which cannot be said about their second meeting in 1998. They exchanged numbers, and he said he would call in 2 weeks. After his call, they started dating. Not without a test of feelings. In 2002, the couple broke up, as Christine wanted to have children, and Kevin was not ready for such a decision since he already had three children from a previous marriage. In fear of losing the love of his life, he agreed, and the couple got married in 2004. They have three children. The secret of their marriage is the ability to make concessions and apologize.

Mel is Capricorn, and Oksana is Pisces. They were first spotted together shortly after his separation from his wife in 2006. The couple had a daughter, Lucia, in 2009, and the partners split up the following year. The story could have ended there, but in 2010 Oksana went to court for a restraining order and accused him of domestic violence and a threat to her life and the life of their daughter. Mel faced a court to defend his honor and fight for the custody of his daughter. He was sentenced to three years of probation and community service.

Patrick is Capricorn, and Rocky was Pisces. They first met in 1984 during the production of Brighton Beach Memoirs. Rocky was 44 at the time, and Patrick was only 18. She actively assisted his career and became his manager. In 1987, the couple tied the knot. The partners kept the marriage a secret for a couple of years, as they were not ready for a wave of condemnation due to their huge age difference. His career took off, and their marriage lasted 7 years. Their divorce lasted 2 years and was finalized in 1994. Parker accused Patrick of physical and mental abuse and clarified that he beat her on the set of Can’t Buy Me Love, but the court found no evidence of her accusations and allowed the divorce. Parker withdrew her charges in 2006. They parted ways, and she died in 2014 of lung cancer. The couple had no children, but Rocky had three adult children from a previous marriage.

Federico was Capricorn, and Giulietta was Pisces. When they met, Federico was a young screenwriter, and Giulietta was a radio actress during the war. He called her after he heard her read the passage he had written. The couple married a year later, in 1943. Unfortunately, early in their marriage, she suffered a miscarriage after falling down the stairs. A year later, she became pregnant again, but the born child died 11 days later from encephalitis.

The relationship of the couple became stronger after all the trials of fate. They have been married for 50 years. He died the day after their anniversary, and she died a couple of months later from cancer. The partners worked together and made an invaluable contribution to the history of the formation of cinematography.

Muhammad was Capricorn, and Belinda is Pisces. The couple got married in 1967 when Belinda was only 17 years old. As she said, this marriage was an arrangement of Muslim parents. The partners had four children. She filed for divorce in 1977. According to Belinda, despite Muhammad’s countless victories in the ring, he was a completely different person in life. He was not a father, and he was a skilled manipulator and abuser. He was addicted to sex, and his wife had to book hotels for him and his mistresses. Being married, he also went to social events with his mistress.

Other Pisces and Capricorn famous couples