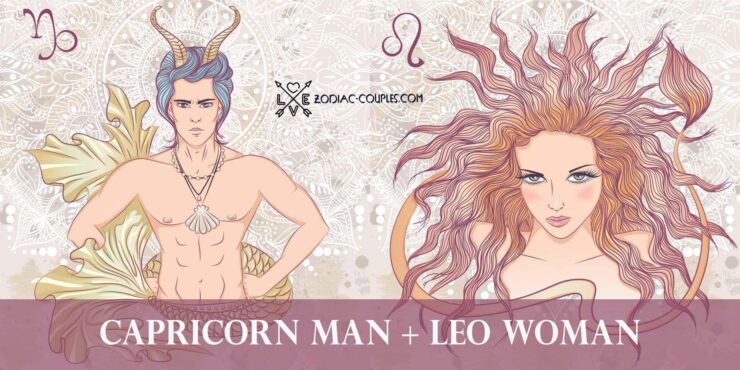 A couple of Capricorn man and Leo woman may seem very strange to others since, at first glance, these are completely different people who have absolutely nothing in common with each other. However, it is worth noting that both signs do nothing without some benefit to themselves, including relationships. By nature, Capricorn is a very pragmatic sign and a partner. He chooses only that woman who has qualities that he does not possess, but they can be useful. The Capricorn man wants to learn something from his partner and share his experience.

Disagreements of signs are based often on a completely different vision of budget and spending. While the Leo woman believes that in order to earn money, you need to spend, the Capricorn man prefers to save as much as possible. To avoid conflicts, they should immediately agree on where is personal money and where is the family budget.

Both signs are purposeful and successful; in this, they are very similar. The Leo woman will make the life of a man brighter, happier, and more diverse because Capricorn alone is uncommunicative and rarely shows his true thoughts to anyone.

The secret of a long relationship is the seriousness of the couple’s intentions. These signs will not waste time and energy on short-lived intrigues. They should enter into a relationship with all responsibility.

Taylor is Capricorn, and Helen is Leo. They met when Taylor was directing Helen in White Nights. Even though Helen swore to herself not to marry, in 1997, they tied the knot. She was 38 when she met the love of her life. As Hackford says, the lack of romance in their relationship is the most adorable thing in this marriage. The generally accepted canons of the manifestation of love are alien to the couple. It’s okay for them to forget to give a birthday present, and Valentine’s Day cards are a nightmare. They are comfortable spending time together at home but regret that they were not able to meet earlier.

Iman is Leo, and David was Capricorn. The couple got married in 1992 after two years of dating. Supermodel and rockstar created a long-term and happy relationship till David’s death in 2016 from liver cancer. They have one mutual daughter Alexandria born in 2000. Iman and David kept their relationship private, although it wasn’t easy since Iman was being followed by paparazzi all the time. That was pure love. After David’s death, Iman said she feels lonely but will never remarry. Bowie is still her one and only husband.

Julius is Capricorn, and Viola is Leo. The story of their love starts when they haven’t even met yet. Viola was so tired of being alone and wanted to find a soulmate that she started to pray and describe how her future husband should look. She magically met her husband three and a half weeks later. After the first date, Viola felt that life was getting better, and Julius fell in love with her. The couple tied the knot in 2003, and in 2011 adopted an infant daughter. In 2020, the couple celebrated their 17th wedding anniversary. Even after so many years, Viola does not stop talking about how happy and how grateful she is to have given her such a life partner.

Gérard Depardieu is Capricorn and Elisabeth is Leo. They got married in 1971 after two months of dating and got divorced in 1996. They have two mutual children. They were two young and exemplary parents, and their family looked happy.

This couple met in 1979 on the Buffet Froid set, but their love story only began in 1997. It was a stormy and difficult relationship with constant quarrels. Carole had nervous breakdowns. Gérard Depardieu cheated on Bouquet several times, and they split up in 2005. In the same year, Carole was seen on vacation with another partner, happy and calm.

Greg is Capricorn, and Elizabeth is Leo. The couple met in 2000 at a Dance class and in 2003 tied the knot. In 2012 Elizabeth gave birth to their first son. The press calls them “rich hippies” since they prefer simple, convenient clothes, evening with sushi and meditation together, and are always smiling and holding their hands. It seems they are happy together and lucky to have each other.

Jacqueline was Leo, and Aristotle was Capricorn. They got married in 1968, five years after John Kennedy’s death and his brother Robert. It was a hard time. She couldn’t feel safe and secure in this country with her children and was depressed.

Onassis was a shipping magnate in Greece, and he could provide privacy and security for her and her children. After the death of Aristotle, Jacqueline returned to America to her previous position – journalist, editor – and completely immersed herself in work. There she met her Virgo man with whom she spent the rest of her life.

It was a marriage of two mature and conscious people. Aristotle, as a man, gave her protection and a sense of security. They say that he rescued her when the dark times came in her life and it wasn’t love. Yes, they had few things in common, but mostly he was a “money shield” that protected her from the hardships of life.

Olivier is Capricorn, and Halle is Leo. The couple first met in 2010 during the filming of the movie Dark Tide. Three years later, when Halle was already pregnant with their first child, the two got married in France. At that time, Halle was already divorced twice. The couple, it seemed, finally found happiness, they spent a lot of time together, and it appeared to the public that they were inseparable. However, after two years of marriage, Halle announced her separation. It was her decision, for which she felt guilty, as she prioritized her wants and needs. The couple has not yet divorced, and they cannot agree on custody.