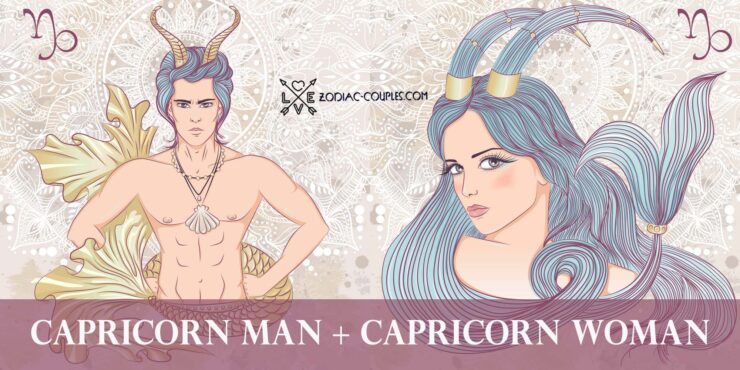 The Capricorn man and the Capricorn woman have every chance to create a strong, long, and harmonious union. Partners have the same good qualities, which only benefits their relationship. This zodiac sign is very hardworking, reliable, loyal, calm. They clearly distribute responsibilities among themselves, and it is crucial for them to feel stability in relationships.

The amazing thing is that both partners with such strong qualities never fight for leadership in the family. They go through all the challenges and difficulties of life together, support each other, and achieve success. In this union, everything is headed by the mind, not the feelings. During quarrels, they easily find a compromise and solve the problem.

The main advantage of the relationship between a Capricorn man and a Capricorn woman is that they are accustomed to a clear schedule of everything and the rules they establish. It would be difficult for other zodiac signs to live such boundaries, but not for them. They are completely similar in this; therefore, it is a double pleasure to establish rules together. Couples rarely get divorced. The only exception will be a partner’s betrayal, which they do not forgive and do not tolerate.

Bradley is Capricorn, and Irina is Capricorn. The two were spotted together in 2015. Their first official debut as a couple was in 2016 at a Paris Fashion Week party, and the same year they were expecting a baby. The baby girl was born in 2017, but the two kept it quiet.

Their separation was confirmed in June 2019. There were rumors about their engagement, but the two didn’t comment it on. Bradley and Irina kept their four-year relationship under wraps and rarely appeared together at social events.

Robert is Capricorn, and Luciana is also Capricorn. The couple met in Argentine when Duvall went to a flower shop, but it was closed. So he decided to go to a bakery store, where he met his future wife. The duo has been together since 1997 and tied the knot in 2005. They are still married, and the fact that Robert is 41 years older is not a problem for them. The couple has no children together.

Nikolai is Capricorn, and Kate is Capricorn too. The couple had known each other long before they started dating in 2015. Partners do not disclose their personal lives, but sometimes they give comments. So Kate denied the rumors of their engagement and said that Nikolai just gave her a diamond ring. She also said that she loves his aristocratic family and perfectly found a common language with his mother. Partners feel great in a relationship, but it is unknown whether they are planning to get married in the near future.

Jude is Capricorn, and Sienna is Capricorn. They met in 2003 on the set of Alfie. It didn’t’ take long to start dating, and in 2004, the two got engaged. The engagement was broke due to Jude’s infidelity. The two tried their fortune in the relationship again in 2009 but separated in 2011. They had no children together, but Law has three children from a previous relationship. Their separation was the result of his affair with his children’s nanny.

Ellie is Capricorn, and Caspar is Capricorn. The couple started dating in 2017. It wasn’t long after the relationship started when Goulding moved to Big Apple to live with Jopling in Soho. In 2018, the two got engaged by breaking the news to the public with an Instagram photo. The partners got married in August 2019 and had a pompous wedding for 300 people. In 2021, they announced that they are expecting their first child together.