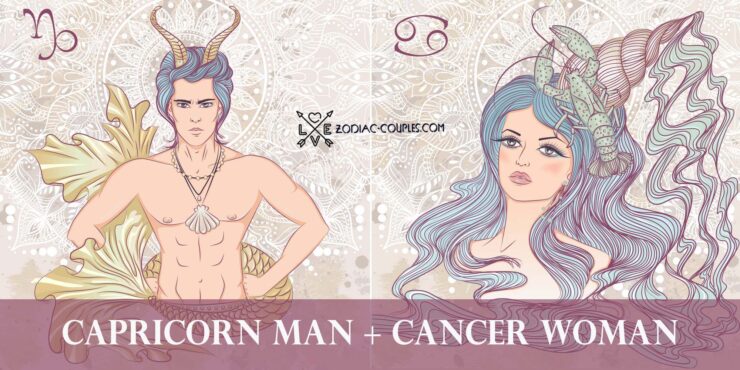 The Capricorn man and the Cancer woman are a union of two opposite signs to each other. However, he is an example of a true man. Reliable, loyal, serious. She is a real woman, gentle and sensitive. A Cancer woman feels his protection and support. In their pair, feelings are alien to Capricorn man; he does not know how to show them. He takes on the business side and resolves issues. She is responsible for the emotional atmosphere in the house, inspiration, and mood.

At first, partners will be difficult together. They cannot accept different temperaments, views on life, and goals. He is cold and does not get an emotional showdown and quarrels. The woman, on the other side, also breaks the dishes at every disagreement. Cancer considers him cold and unfeeling. She lacks flirtation, romance, and surprises. Capricorn does not understand hints and speaks directly about his feelings. He is one of those who once said, “I love you,” and do not repeat, because if something changes, they will inform the partner.

Despite their differences, the relationship of the zodiac signs is built on respect and trust. They learn to complement each other. Cancer woman will support a Capricorn man with the right word, and he will give her wise advice.

Margot is Cancer, and Tom is Capricorn. The couple met in 2013 at the set of Suite Francaise. She is from Australia, and the set took place in London. After the project, she returned home. In 2014 she arrived at the premiere of The Wolf of Wall Street and met her friends from Suite Francaise. They decided it would be cool to live together, and she moved to London. One of those friends was Tom. They kept their relationship secret, but since they all lived together, it couldn’t last long; everyone noticed that chemistry. In 2016 the two tied the knot at a private ceremony. Now, the couple still keeps their relationship private. They are friends, lovers, and good co-workers. They dream of having kids one day.

Sofia is Cancer, and Joe is Capricorn. They met in 2014 at the White House Correspondents’ Dinner. That time Sofia was engaged, but for Joe, it was love at first sight. Immediately after her split, Joe asked her for a date. They decided that things won’t work out after that meeting cause, as Sofia said, he is too handsome and young. However, she gave him a chance. Manganiello learned Spanish to propose to Sofia, and in 2015 they moved in. Their wedding took place in 2015. The couple is still together. Their secret of a happy marriage is humor and support of each other’s dreams. They also manage to cooperate in business.

Pamela is Cancer, and Kid is Capricorn. The couple started dating in 2001, and the next year got engaged. That’s when their relationship started to be on and off. The two called off their engagement in 2003, although reunited later and tied the knot in 2006. The next year the couple got divorced, and the reason was the film Borat where Pamela participated, and according to the plot, she was kidnapped. Kid hated that project. In the film, Borat called Pamela “my wife,” and perhaps, it was inappropriate for Kid.

Diane is Cancer, and Norman is Capricorn. The two met in early 2015 on the set of Sky. Diane was in a relationship at that time and separated only in 2016. There were unconfirmed rumors of Kruger and Reedus kissing and dating and that her affair with Norman was the reason for splitting her long-term relationship. In 2017 he posted a proud pic of Diane when she got the award for Best Actress award at Cannes Film Festival. The couple made it official in 2018, debuting on the red carpet of the Golden Globes. The same year they welcomed a baby. The union is inseparable. They post happy home videos on Instagram and share their parenting experience. We wish them all the best.

Dax is Capricorn, and Kristen is Cancer. The couple met in 2007 at a dinner party, and it wasn’t love at first sight. They shortly started dating but split up soon since Shepard said he is not ready and is still dating other people. The two reunited and got engaged in 2009. Dax and Kristen tied the knot at a low-key ceremony in 2013. They welcomed two children. Their relationship is not perfect, and as Bell said, therapy helped them to solve the issues. A quarantine time in 2020 was hard for these two, but they coped with that perfectly.

Other Cancer and Capricorn celebrity couples