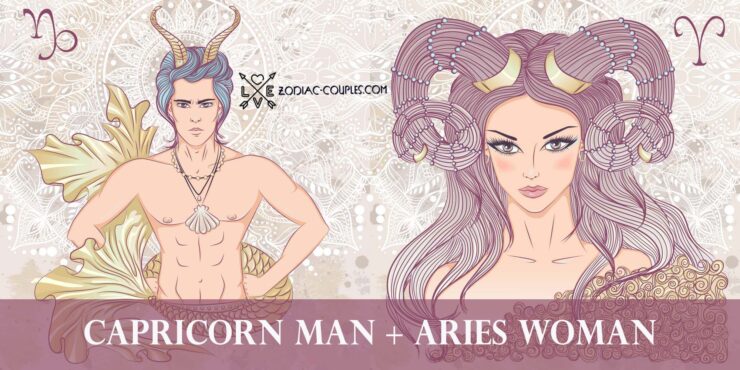 The Capricorn man and the Aries woman are a very complex union. They go to extremes and become either good friends or bitter enemies. These zodiac signs have different fire and earth elements. The first is proactive but illogical, and the second is reliable and sustainable but not active. The zodiac signs are annoyed by this difference, and it will be possible to build a relationship only by reconciling with the qualities of a partner.

Relationships between a Capricorn man and an Aries woman are scarce, all because the partners have different views on life, beliefs, and means of achieving goals. Initially, they do not understand the logic in each other’s actions; they get irritated and try to fix it. Partners need to learn to see the benefits of these differences. However, they can be united by a common goal because it is then that their common qualities, such as perseverance and the ability to achieve what they want, will appear.

At first, the partners will fight for leadership, but soon Aries will give up. They build a relationship with mutual respect. Also, a woman will make a man’s life brighter and more fun, and he will become real support and reliable protection for her. Over time, Capricorn may try to make Aries calmer and more serious, which the lady will not like. The two should also avoid mutual criticism.

Orlando is Capricorn, and Miranda is Aries. The couple started dating in 2007 and kept their relationship under wraps till 2008 when they debuted on the public. Orlando proposed to Miranda in 2010, and one month later, they tied the knot. They have a son together. In 2013 the two announced their separation. Although they are not married, they still love, support each other, and are a family.

Jeff is Capricorn, and MacKenzie is Aries. The couple met in 1992 when she was his assistant in D.E. Shaw in New York City. They tied the knot in 1993, six months after their first date. The two have four children, and one of them is an adopted child from China.

As both commented on the divorce in 2019 on Twitter, they finally separated after several attempts to make things work and separations. They stressed that they end only their romantic relationships but continue to be good friends, parents, co-workers, partners in projects and adventures. Both of them are practical people with great potential in making money, so all the issues were solved wisely.

Bradley is Capricorn, and Jennifer is Aries. When the couple was asked if they are together, both of them refused to comment. Although the two got engaged in October 2006. They tied the knot in December, but the marriage didn’t last long. Jennifer filed for divorce four months later. It was a shockingly short marriage for the public. She cited irreconcilable differences and asked for privacy, and his representatives confirmed it was a mutual decision. This is not to say that the partners remained on good terms after the divorce. Jennifer was very ambiguous in describing the ex in her book and also likes to leave comments under photos and news with his name. Perhaps the partners just changed their minds in time and realized that they were looking for something completely different.

Stephen was Capricorn, and Jane is Aries. They met in the early 1960s when they were still students at the university. When they first started dating, Steven was diagnosed with ALS and wanted to break up to not burden her with it. Their love was stronger, however, and the couple got married in 1965. They had three children. They divorced in 1995. Stephen fell in love with his nurse, and she fell in love with a musician. After the divorce, their relationship was not good, but they managed to improve it. She was present in his life and supported him until his death.

Robin is Aries, and Dane was Capricorn. The two met on the set of Santa Barbara in 1984 and started dating. It was love at first sight for Dane. They tied the knot in 1986, but the marriage lasted only two years. Robin was only 20 years old when they got married. She wanted to move and develop her acting career. When her career took off, Dane continued to play in soap operas. The tension in the relationship began to build up, and they eventually broke up.

Patricia is Aries, and Nicolas is Capricorn. They met when she was only 19 years old. It happened at a grocery store in Los Angeles. Nicholas was with his friend, and both said after meeting that they would marry this girl. Cage was 5 years older than her. To prove that he was serious about his intentions, he told her to write down a list of things he should get. There were the most unusual and even non-existent objects, and in the end, she did not agree to marry him. They parted ways, and each had their own family and children.

In 1995, fate brought them together again in the same store, and two weeks later, the two got married. They divorced in 2000. Nick stated that they broke up nine months after their marriage, but Patricia says that is not true. They sometimes lived separately due to quarrels but did not part. Probably, the truth is somewhere in between. They continued to act in films as a couple until the divorce.